Toffee is her name... 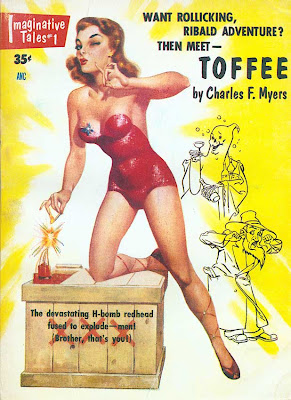 "Toffee was enough to make any man dizzy--without seeing her through X-ray eyes!"

A dull ad exec's literal "dream girl" who emerged from his subconscious full-grown and sprang to life, the various sexy and comedic Toffee short stories published in the sf pulp IMAGINATIVE TALES got the cover far more often than the works by writers like Ed Hamilton and even the Grandmaster himself, Robert Anton Heinlein.

More often, the Toffee stories were a type of "spicy" comedy, with clever rapid-fire dialogue and a type of ribald, daring humor. Surprisingly, they hold up well even today and still crackle with a breezy kind of sexy, playful fun. The wit of the Toffee stories is a credit to the diversity of the material published in science fiction mags. Read the complete collection of all eleven Toffee stories here on Google Books.

For FREE. Sure, you have to tolerate the occasional missing page, but man, I am really loving this Google Books service. Now dozens of full texts chock full of discredited 19th Century Hollow Earth theories are lovingly available to the approximately three people that will read them, of whom I am one. You know, I remember out of sheer boredom I wrote my name, full address (at the time) and dozens on dozens of analytical notes all over a "Lost Race" text, a 1978 reprint of a 1904 book called "Cast Away At the Pole." Periodically when visiting my library I go to see if anyone's written "back" in the book. So far, no dice. 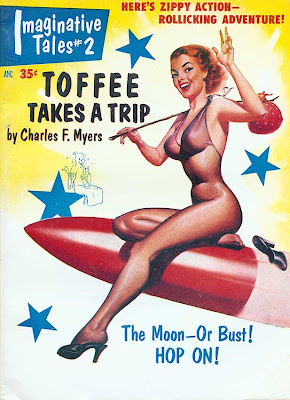 The Toffee stories are worth reading for the main character, one of the more interesting science fiction women until the coming of Schmitz's Telzey Amberdon and Heinlein's Podkayne of Mars. Toffee was a brassy, wild, fun redhead, that lives life with gusto with an extroverted personality, playfully exhibitionistic, flirtatious with nearly every male she meets, but also incredibly vain and adores being the center of attention. She had a sweet disposition, until she was provoked and a scrappy temper emerges. She was willful, defiant and thoroughly endearing.

Best of all, Toffee was unpredictable. It was impossible to guess what wild thing she would do next. More than anyone else, she reminds me of "It Girl" Clara Bow. Still pictures never did justice to her energy and boldness, how she would just do things like jump on top of her boss's desk and lay herself out against it in the middle of an office scene, and it was obvious her behavior was just as much of a surprise to the other actors as it was to the audience. 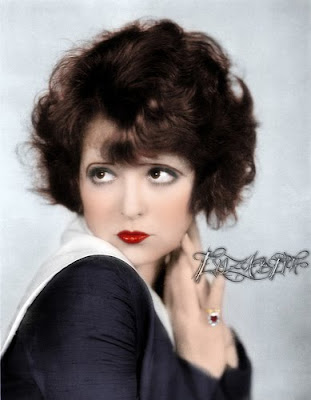 Toffee came from the subconscious of the world's most uptight man, and seemed to live for getting him into trouble. She was living, walking trouble, and seemed custom-made to boldly upset conventions in what always seemed like an era as stiff, conformist and uptight as the main character. Toffee appears when needed and disappears only when her purpose is accomplished, which often ends with the main character going to prison or various patience-trying comical misunderstandings.

Toffee was (and I hate to use this term), feisty. When a nurse gets a little grabby, she actually bites him.

"You bit me!" The Intern wailed. "You bet I did! And next time you come groping around where I'm dressing with those great hammy paws of yours, I'll gnaw 'em off clear to the elbows!"
This was, naturally, after Toffee did one of her favorite activities, changing clothes in a public space. When Toffee got stares and was told she was indecent, she laughed and said, "Yes, I know!"

More than anything, the Toffee stories, like the television series Mad Men, features the go-go world of the fifties, back when Americans still had balls. Every office had a fully stocked bar and sexual harassment was rampant.This was the era of grotesque sloth like the three-martini lunch. The Toffee stories just took it for granted that a boss ought to have an affair with his attractive female secretary. In general, reading these office-humor centered stories feels often like visiting another planet. A cooler planet.
Posted by Julian Perez at 5:55 AM