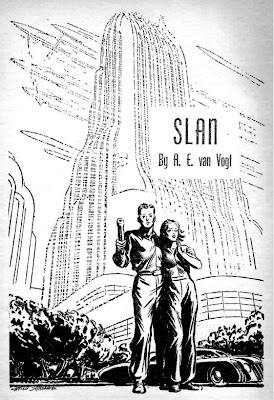 What's incredible about van Vogt's Slan is that unlike almost every single other work written during science fiction's golden age, it is still read (and cared about) today and periodically discovered by new fans. Take for instance Slan's page on Television Tropes and Idioms, or the fact that the basic plot of Slan was borrowed by the recent film, Ultraviolet with Mila Jovovich. In fact, while watching Ultraviolet, friends were astonished that I could make predictions about the events of the story. How did I know? "Well, that's what Slan did."

What's even more sensational is the fan-support that exists online. Check out the near encyclopedia-complete guide, "Slanology," available online from an eager-beaver fan who put an impressive amount of work into it, including detailed analysis of the Slan world, history and technology.

Part of the reason Slan is still read today is that it isn't about any of the other silly themes of the Golden Age. It isn't about a monster of some kind, like Theodore Sturgeon's Killdozer! It isn't about a Heinlein or DC Comics style cigar-chomping badass father figure that solves his problems with a dubious engineering concept.

Slan is a story about prejudice. In the distant future, Slans emerge, a race of humans with tendrils on the foreheads with greater intelligence and telepathic powers, who are hunted and pursued by normal humans. The book opens up with a young Slan child, Jommy Cross, who watches as his parents are murdered by the secret police. Jommy Cross has to grow up alone.

The most fascinating part about Slan is the world background. Unlike other novelists, van Vogt doesn't lay it out flat before the reader, but there are conflicting tales, outright lies and propaganda, and Jommy has to discover it all for himself. Part of the reason Slans are so hated is because of the widespread belief among humans they capture human babies, for instance, which Jommy refuses to accept as true. There were also rumors of human/Slan wars that ended in human victory, but the true history of the world is entirely unknown to the characters, who have to unravel it for themselves.

There's one great reason to read A.E. van Vogt's Slan, and that's for it's villain, the absolute dictator of earth, Kier Gray, easily one of the greatest villains in all of science fiction. I don't feel this character receives enough respect. Since when does any review of Slan ever spare any praise for what an extraordinary creation Kier Gray is? It is true that Kier Gray is the reason to read this book, just like Captain Nemo is the reason to read 20,000 Leagues Under the Sea.

A magnetic, awe-inspiring and tigerish man of obvious and keen intelligence and animal magnetism, Kier Gray is a master tactician and thinker that is almost always several steps ahead of everyone else, with contingencies in case things go wrong, as well as a master manipulator and orator. Kier Gray operates mentally at almost a totally different level than anyone else in the series. While many of his underlings engage in unthinking anti-Slan prejudices, these attitudes are far too petty for a pragmatist who thinks big-picture like Gray. At one point, he wonders what it would be like to have a few Slan scientists on his side. Unlike the others in earth's government, who believe their own propaganda thickheadedly, Gray has a more realistic view, that most likely the Slans will win in the conflict unless they get a leg up.

When the aptly named chief of his secret police, John Petty, shows ambitions to take over, Kier laughs off his plan. "He is only feared. I am both worshiped and feared." The sequence in Chapter 3 where Kier Gray prevents a coup to dethrone him is one of the most awe-inspiring sequences.

Incidentally, it's worth mentioning that, found among A.E. van Vogt's papers, there was actually an outline for a sequel to Slan, known as Slan Hunter. If ever there was a standalone novel crying out for a sequel, it would be Slan. Personally, I'd prefer to think of Slan's sequel as one of the great unfinished science fiction novels ever written, including the last of E.E. Smith's Lensman books. Supposedly, Robert A. Heinlein, who near-worshipped Smith, knew all about the last Lensman book, but refused to give details even after his friend's death because "it was his story to tell, not mine." 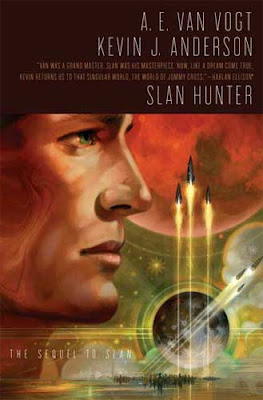 Nonetheless, after the mania that were the posthumous Herbert Dune prequels, a publisher with half a brain, when hearing about the story did a ca-ching ca-ching cash register sound and rustled up some ghost writer to actually create Slan Hunter, an unmade sequel to one of the most famous science fiction novels ever written. The story actually has an air of tragedy, as van Vogt actually contracted Alzheimer's and couldn't finish it.

To my great astonishment, I didn't absolutely hate Slan Hunter, as it had a few great twists, like having a character be a woman that gives birth to a Slan baby, who goes on the run to protect it. But there was so much there that I didn't like. Kier Gray was easily overthrown, and it seemed as if everyone's IQ dropped substantially. John Petty the Slan Hunter was a vicious bigot, but he was nonetheless competent and brainy...in this novel, he needed very basic things explained to him. And there were elementary details about the world that were changed, like the notion of Kier Gray, instead of being a ruthless dictator, was a democratically elected president. (WTF?).
Posted by Julian Perez at 2:26 PM