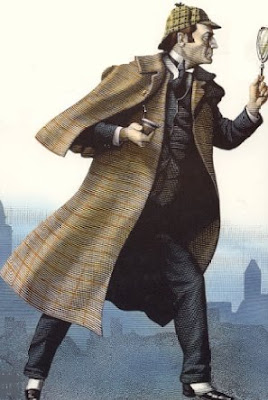 It doesn't surprise me in the least that Sir Arthur Conan Doyle was an easily bamboozled, crackpot believer in spiritualism, because if the Sherlock Holmes stories are anything to go by, he had a belief that human reason worked in an almost mystical, intuitive way. Because Sir Arthur Conan Doyle controls the world, Holmes is always inerringly right the very first time he makes a deduction, never finds evidence too ambiguous to use, never needs to revise his theories or take into account new proof, and Holmes's single interpretation of multiple possible explanations is always correct. Holmes is only infallible because Doyle wrote him that way.

For instance, in the Adventure of the Blue Carbuncle, Holmes discovers a hat, and guessed the owner was once rich but recently fell on hard times, was having problems with his marriage, was of great intelligence, and had bushy hair of a certain style.

And he figured out the hat's owner was once rich but fell on hard times. What about the possibility the hat was stolen, lost and found by someone else, or given away?

Apart from the magical, intuitive view of the process of reason, there's very little else to like in Sherlock Holmes stories, as for most of them Doyle just doesn't play fair with the reader and doesn't present all facts to the audience.

You know, I often say this or that movie is "formulaic," but with the James Bonds, it's literally true!

With the exception of the excellent Casino Royale, the assembly-line plot never varies, the characters are the same but with different names. There's never an attempt to do anything new or different. Even the actual events of the plots are constantly recycled. It reminds me of how Taco Bell tries to convince us they've combined their five ingredients in a totally new way! Always the scene on skis, always the scene in the casino that establishes that establishes how gigantic James Bond's testicles are.

Worse, James Bond movies are either the originator or the perpetuator of almost every action movie cliche: the bomb with the digital countdown, the car chase, the ability of characters to run from explosions, the entire creation of scenes as setups for "witty" quips.

I remember when I was about to see my first James Bond movie at age ten or so on television. My Mom, who was not by any means a prudish woman at all, decided to watch it with me because she wanted me to know that women didn't really act that way. At the time I thought that was an overreaction (not to mention quite a buzzkill), but I have since come to the conclusion that Mom was right. Women don't really act that way, and saying the Bond movies are a fantasy doesn't get them off the hook. Lots of people have, frankly, embarassing fantasies and I'd rather not watch them, either. 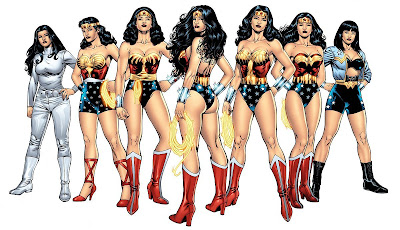 The idea that Wonder Woman is as important a superhero, or at least as interesting, as Superman and Batman is pure wishful thinking.

I would do an article here, but the funny cats over at Topless Robot did it with much more panache and I have really nothing to add:

Top Ten Reasons Nobody Cares About Wonder Woman
Posted by Julian Perez at 5:52 AM

My thoughts, since you asked (you did ask, right?):

HOLMES: Agreed the "logic" in these stories is pure hokum and dodgy cheats, but I still enjoy them, which is interesting as almost nothing else set in this period interests me even slightly. Partly it's because Holmes himself is an interesting character; a genius in his chosen field (again, if you accept Doyle's trickery) with little to no interest in anything outside of it. He's completely tactless, blunt and at times quite snarky in his dealings with others; too focused on the puzzle of the moment to observe the social graces and, we often suspect, disdainful of them anyway. If Holmes had been "Mr Perfect", charming and handsome and Bondian on top of being The Smartest Man Alive, the stories likely wouldn't appeal to me. But with all his rough edges and peculiarities he instead emerges -- for me -- as a fun eccentric in the grand Brit tradition. In other words, I prefer Jeremy Brett to Basil Rathbone.

I even like the formula enough to enjoy the thinly disguised version that is "House."

Having said that, I haven't really revisited Doyle since becoming a Houdini fan and learning what a jerk Doyle was in real life. As to his gullibility, William Kalush and Larry Sloman claim in "The Secret Life of Houdini" that Houdini tried to amuse Doyle with the old "watch me pull my thumb off" gag and was flabbergasted when Doyle proclaimed it, in all seriousness, as final and conclusive proof that Houdini had supernatural powers.

BOND: From my years running a fan site, I know this character either works for people or he doesn't. Few would deny 007 and his creator were misogynist, racist, nationalistic snobs; the distinction is between people who have a problem with that and those who don't. And no, I won't attempt to characterize either group. I've been known to move back and forth between camps.

An interesting thing about the films; when they stick to formula they're criticized (even by the faithful) as derivative, but when an entry experiments with new things it's often hit with complaints (from the very same crowd) that it "doesn't feel like a Bond film." As you know, precedents for formula storytelling go back to the time before writing. There have always been stories we want retold to us even though even we know how they'll come out, and for the most part all the stops along the way. The storyteller who adds a new detail in the right spirit gets applause and the one who throws in a jarring note will be derided for "not getting it." And God help the one who changes the ending totally, or alters the hero's nature too much.

One of the most entertaining parts of running that site was hearing from people who mixed up details of the various films, like "I love the one with guy who threw his hat and had steel teeth. You know, the one where the laser almost cuts Bond in half, but then he gets in his car and drives it underwater."

WONDER WOMAN: Agreed is useless. There's only two reasons I can think of why she's part of the DC "Trinity": (1) Along with Superman and Batman, she was the only hero to remain in continuous publication since the Golden Age and (2) she satisfies an Affirmative Action-like quota and makes DC look progressive for having a female at the top of their roster, one of the few areas where Marvel can't claim superiority.

Lots of people enjoy Holmes as a character, for the reasons you mention. I suppose my critique of that would be that with the exception of his developing friendship with Watson, Holmes is more or less the same guy in the first story as he is in the last. I guess that's why the story with Irene Adler was so memorable to most people: here was the one story where that wasn't true!

I didn't know about the Houdini "break my thumb" trick. That is such a great story, but unfortunately such a typical one for Doyle.

Here's another one involving Houdini and Conan Doyle: Houdini once did the "escape from a trunk" trick for Sir Arthur and even after Houdini showed him exactly how he did it, Sir Arthur still refused to believe that it wasn't just Houdini's supernatural powers at work!

As for Bond, I'm amused by the observation that when something goes too far from this insanely exact formula and the "five Taco Bell ingredients" that Bond's fans say it doesn't feel like a James Bond film. I think I understand now what Roger Ebert meant when he said that moviegoers should avoid formulaic movies because the sole effect of formulaic movies is to prepare you to accept more formulaic movies, just as the ultimate effect of bad movies is to prepare you to accept more bad movies.

My critique of the female characters in a lot of Bond movies, "they don't act like real women" is a characterization complaint, not a complaint with poltical overtones.

It's been my general experience that I only notice the built-in politics of a work when it's terrible. Robert A. Heinlein for instance, is such a sweet and charming old man that reading one of his books, even one like "Starship Troopers" (where he says that "more questions have been solved by violence than by anything else") is like going on a fishing trip with a reactionary uncle that you love, and part of the price of that is rolling your eyes slightly when he goes on about how only people in the military should ever vote.

Also, I've castigated the alien invasion story for appealing to unpleasant instincts like xenophobia and fear of the Other, but I have to admit, I reread Heinlein's "The Puppet Masters" every three years or so since I was 12. Yes, that does make me a hypocrite.

As for Wonder Woman, I recently saw the pilot film on Hulu a couple weeks ago and I was all psyched to pan Lynda Carter, mostly because everybody friggin' loves her...and that's how I roll. :-)

But her performance was actually the one thing about that series that really worked. She singlehandedly identified the correct tone for the entire series. She had a very winning, endearing quality, a real earnestness, a lack of guile and a "poker face." It was obvious she took the part seriously and played it straight. I was really impressed with her.

I can't say that about the rest of the pilot film, which was full of things like Red Buttons playing the exact same character Richard Pryor would in Superman III with the exact same results. It has a very confusing tone, to the point where I'm not sure whether I'm meant to laugh at some of the jokes. Maybe the show got better after that, I wouldn't really know.

Why single out women? Very few people in the Bond films act like real humans. Where else would you find a villain who serves the hero a gourmet meal before killing him? (shameless plug department: check out my article on crazy Bond villains here: http://www.hmss.com/films/villains/evilgenius/
...it's cheaper than buying the book!)

Lynda Carter was, to me, everything people said Christopher Reeve was as Superman (but I didn't buy)...earnest and guileless, as you say, a true believer in the power of truth of justice, and disarming enough to make even a true cynic -- on screen or at home -- want to believe as well. The pilot played up the "humor" a LOT more than the rest of the series. Not that it wasn't still campy in spots, but you didn't have such overt scenery-chewing.

"Better" is a relative term, though. In general the scripts in the first season were lazy and had an unfinished fell to them. I didn't buy the DVDs of the subsequent seasons and so haven't seen them in decades, thus I can't judge it. All I remember is when they moved the setting to the 70s I quickly lost interest, Lynda or no Lynda.