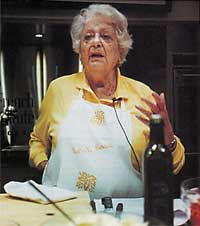 I wanted to write a few of my thoughts on cooking a while back, and it occurred to me that I really didn't have much in the way of concrete recipes, but more like a list of a few essential things to keep around the kitchen for sudden improvisation. The one thing I always loved about Italian food was the sense of spontaneity.

That's one thing that always bugged me about the introduction most people have to Italian cooking, the books by Marcella Hazan. Hazan is to Italian food what Julia Child is French cooking, and everyone's read her Marcella's Italian Kitchen. The thing with Marcella is, she brings the kind of precision of French cooking over to Italian. Not that I have anything bad to say about French cooking, but rather, there's a certain kind of exactness about her work that bugs me.

Let me give you an example: she has a recipe for risotto which involves a very specific vintage of Italian wine. Marcella wrote the following statement: "You can use an inferior wine, of course, and you might create a great risotto. It will not, however, be this risotto."

See what I mean? Now, thank goodness for me I live in a larger city, so I was able to find the vintage just fine. The wine she gave as totally necessary for this recipe cost well over $50 per bottle. I couldn't believe it. Now, I've had some recipes that call for pretty specific liquors in my time...one wonderful recipe for leg of lamb requires a basting in dried fruit, mint leaves, pomegranite juice and an Iraqi liquor named Arak, which I finally found after going to six Asian groceries...but shelling out fifty bucks for a wine? Now that's just crazy.

Also, Marcella Hazan popularized balsamic vinegar in the United States, to which I owe her a hearty 'fuck you' as it is now the single most overused condiment ever.

Salads, though, are the ultimate improvisational food. It's really hard to mess it up, and it encourages you to keep fresh veggies around.

A few things to always have with you if you're a salad lover:

Never buy store bought salad dressings if you don't have to. For one thing, it's much easier to make your own. Asian or Thai peanut restaurant sauce is basically three parts peanut butter, one part soy sauce, one part tap water and one part lemon juice.

Here's a special recipe of mine for a special kind of Tofu, Blue Cheese and Walnut Salad:

Try a raspberry vinaigrette for salad dressing, or a combination lemon juice and (Marcella's favorite), balsamic vinegar, a mixture weighted toward the lemon juice.

On a different tack, here's a recipe for a healthy, low-fat one-person wheat and yogurt dessert salad.

(Kefir is a type of Middle Eastern sour yogurt drink. It's become quite trendy these days, so you can probably get it in any supermarket.)

Toss the sliced banana, wheat germ and walnuts together on a bowl, then pour the kefir. Stir it until the wheat germ and the fruit are mixed.
Posted by Julian Perez at 6:31 AM