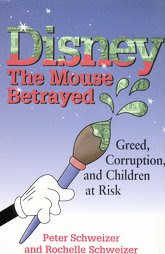 The most frustrating thing about Peter Schweitzer's THE MOUSE BETRAYED, a story about how Disney was transformed after its founders' death by Eisner and others into something that Walt would find unrecognizable, is that it is sometimes very true: there have been occasions where Disney Theme Parks have kept injuries at their parks secret by transporting wounded visitors to their own facilities instead of to hospitals.

By the far the most surreal anecdote is how at Disneyworld, at least once per day on average in the summertime, one guy in a cartoon character faints from the Florida heat, where they are then shoved into the back of a "Code Blue" van, an internal ambulance. The idea of someone that shoves for a living collapsed Disney characters into an ambulance all day is a pretty bizarre thought.

I got the feeling all while reading this that there was a sort of disingenuousness at work, and it was politically motivated. Only a portion of the book is related to actual, real malfeasance on the part of the Disney company: corruption, mismanaged finances, park injuries, and even one chapter that accuses THE LION KING of plagiarism from the famous KIMBA THE WHITE LION.

(The book was written before the most offensive creative decision, the endless sequelization of everything: Pinocchio II, and so on.)

The majority (two-thirds) of the book are about things that are only bad deeds if you're a right-wing ideologue that rates entertainment in terms of how it subscribes to your ideology instead of any intrinsic value: Disney Parks' tolerance of homosexuals (including the famous "Gay Day"), Disney's multiculturalism (as seen in films like "Pocahontas"). Finally, there's Disney's decision after Eisner to make non-family films under the Miramax label, not "Disney" proper.

The book reads like its top priority is to "score points" and make cheap shots, and there are some occasions where it gets downright sloppy. The moment I realized this book wasn't being honest with the reader was in the first few pages when it lambasted Michael Eisner for supporting the movie WHITE DOG.

The exact quote from the book is like this:

"[Eisner] had insisted on producing WHITE DOG, a movie about a racist canine that attacked only blacks. It was considered so bad it was only shown on basic cable." (Schweitzer, pg. 4)

I can just imagine after writing this diss of a sentence, Peter Schweitzer turned to his wife for a high-five and a BOOYAH! It has the smarmy air of a fratboy slam.

But no one ever considered WHITE DOG a terrible movie; it was denied release because of its incindiary subject matter. It was shown on basic cable not because it was "bad," but because it was the only way to get the movie released after misguided activists and scared suits bailed on its theatrical release. It was just a cheap shot against Eisner, and it bothers me they misportrayed one of my favorite movies to do it.

WHITE DOG was a pull-no-punches, haunting and weird story by one of Hollywood's most subversive directors. The quote above frames WHITE DOG as one the very worst exploitation pictures, a bad concept film like KROG with Joan Crawford, about an unfrozen caveman that goes berserk every time he hears rock music.

I can never find myself ever becoming truly offended about politics or religion. But slam a good movie, or frame it in a false and deceptive way? Now that just ticks me off.

As for the rest of the book, its guilty of an error: assuming that readers will be offended by things the writer clearly finds ofensive. The transformation of Disney from a studio that Tom Hanks once described as "like being at a Greyhound bus station in the fifies" to a slick Hollywood operation just like Paramount, Columbia and the rest is only a truly offensive thing if you buy into the implicit value system the writer may not even be aware is at work, where things that are rural and bucolic are superior to things that are urban; that family entertainment is valued over things that are just for the adults; that in general, things in the past were better than they are today.

For this reason, whenever the writer trotted out something that he invites us to see as tragic, like the idea of a large entertainment corporation having a side arm that produces pornography, it gets a big, fat "so what?" from me.
In the end, that's the most blistering critique I can offer of THE TRUTH BETRAYED: the book only has its effect if you're already a true believer, so it gives you even more to have (self-)righteous ragegasms over. "Gay Day" is only offensive to those that dislike homosexuals. If you're indifferent to the homos, or have a "live and let live" libertarian philosophy, it's impossible to be offended.
Posted by Julian Perez at 1:33 AM

"one chapter that accuses THE LION KING of plagiarism from the famous KIMBA THE WHITE LION."

There's mention of this in Trish Ledoux's Anime Guide. It even mentions how apparently Matthew Broderick was quoted as saying he thought he was doing a Kimba remake.

There was another book whose title I can't remember that dealt with the same stuff this one does. I remember reading it back when I was at Miami-Dade College. that book didn't have the same failings this one has.

There is absolutely something to the idea that Disney's Lion King had its roots in Kimba - for instance, the dead, wise father appearing in the clouds to give his son sage advice from beyond the grave.

There is much more to the case than one interview by Matt Broderick. Simba was originally colored white, for instance, and every character in Kimba had an equivalent and look-alike in Lion King. The most startling was the wise advisor baboon counselor that knew Kimba/Simba's father. What's more amazing is, in both Lion King and Kimba, he was mistakenly drawn as a mandrill and called a baboon!

I never said this wasn't true. But rather, the book emphasized the Kimba/Lion King stuff not out of a sincere desire to set the record straight, but as another cheap shot in a venomous, political, ego-stroking "fact" book. It reminds me of this giant genre of books, where they were quite literally willing to say anything. Sophistry at its dirtiest and nastiest.

This is the worst example of politics-as-a-prison-fight.

Paul Chapman said that Atlantis: the Lost Empire had a lot of similarities to the Japanese cartoon Nadia: Secret of Blue Water. Having never seen Nadia, I didn't feel inclined to comment.

I've never seen Nadia either but I've heard elsewhere (not from Disney apologists, but fellow anime fans and those who have seen both.) that the Nadia/Atlantis arguement is not as pronounced as the Kimba/Lion King one. Like the latter, Atlantis has similarities to Nadia, but it does not come off as much of ripp-off as Lion King.