The Savage Dragon weighs in... 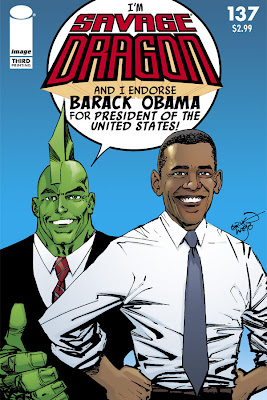 I've never seen people as excited about any candidate as they are about my buddy Barry.

Critics dismiss him as style over substance that gets ahead on a silver tongue and a strong speaking voice. Actually, I'm pleased to see Obama restore eloquence to the institution of the American presidency. After years of divisive, nasty politics that revisit old grudges from the sixties that are no longer relevant, here's a candidate that really is a "uniter."

There is something admirable about the campaign, which is one the best-organized I've ever seen. My Dad gave some money to Obama, and received an email that told Papa all the people in his area that did the same, and also gave him a list of people that are on the fence and need to be convinced. Wow!

Obama dominates the debate in such a way that makes what his opponent does seem like a sorry afterthought. After Obama's Kennedy-like speech in Berlin drew the press and world attention, McCain gave a series of speeches in all the small-town Berlins in America. Obama's refusal to knuckle-under to McCoward when he rightfully figured he'd get a drubbing by Hawaiian Abe Lincoln in the debates, and tried worming out with the "I'm busy" excuse. Obama's response was as classy as it was firm: "As President, you'll have to do more than one thing at a time." By standing firm, McChicken's grandstanding scheme backfired. It was great to see that after years of liberals rolling over and giving Republicans everything they want.

Likewise, Obama had an impact on policy and world affairs just as a candidate. His plan for a withdrawl from Iraq after meeting the country's leaders was not only adopted by McCain himself (after a bumbling essay he sent to the New York Times that didn't even define what "victory" would even mean) but was incorporated by the Bush administration.

Change is important because institutions have become outmoded. The 2004 election - based on bad feelings about Vietnam - was outmoded. Obama's change isn't just a slogan, but a sorely needed attitude to a world like a too-tight sweater. There's a visionary element to his character: his Kennedy-like declaration that within ten years America would be energy-independent, and that by 2050 we'd slash carbon emissions by 80%. Likewise, institutions created during the Cold War are no longer functional or necessary, at least in their current form. Obama proposes restructuring NATO with allies.

I don't mean to gloat, but Barry represents a cultural shift in the U.S. after the collective national insanity that was the Bush Presidency. Even at the Republican convention, no one defended him except poor Laura.

When I first got political consciousness in the early 2000s, it was a very scary time. There was talk that strategists like Rove would create a permanent Republican majority, by swaying Latinos. Of course, this master plan broke down when the massive campaign against undocumented workers began - a "dogwhistle" term for expressing anti-Latino and anti-immigrant sentiment. Still, I do remember the 2000 Republican convention where they invited some goofy mariachi on stage, who scared me even more than even Darth Cheney.

Nowadays, the public has wised up. Our current cultural problems - the worst economy since the Great Depression - can't be blamed on the liberals, who weren't in power. They can be layed exclusively at the feet of conservative ideals: free market de-regulation and tax cuts, as well as the use of force and unilateralism to solve problems internationally.

In other words, conservatism failed. Let someone else have a try.
Posted by Julian Perez at 4:40 AM

eToro is the ultimate forex trading platform for beginning and full-time traders.