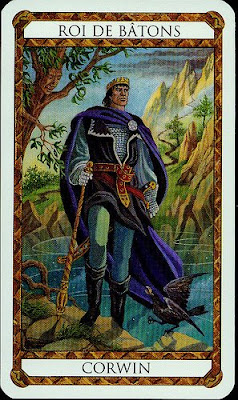 I'm very surprised that I enjoyed Zelazny's NINE PRINCES IN AMBER, Zelazny's take on the mythology of the Tarot, as much as I did. I generally dislike the traditional kind of "fairies and dragons" fantasy, opting for the more innovative and weird kind like Tanith Lee and Moorcock's. There is still a soft spot in my heart for Andre Norton's WITCH WORLD.

One advantage I had was, I read NINE PRINCES IN AMBER "cold," without any prior knowledge of the series, so the mysteries in the beginning part of the book really were captivating. Corwin wakes up in a hospital bed after a car crash without his memory, where the nurses are determined to keep him drugged. Corwin has no memory of who or what kept him prisoner, and he discovers that he is kept prisoner on our Earth by members of his own family, all of whom have been struggling for power since their father died.
"Never trust a relative. It is far worse than trusting strangers. With a stranger there is a possibility that you might be safe." 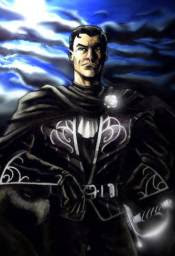 The greatest prize is Amber, located at the center of the universe and the very model and archetype of the perfect city. Everything else in the multiverse, every other city, every other earth (even our own) is a mere shadow reflection of the true Amber. This is why Corwin and his relatives fight over Amber. Sure, they could just as easily find in the cosmos another Amber where they are rulers, but only Amber, the perfect city, is "real." Each and every one of them have a distinct appearance, fit to be placed on playing cards: Corwin's colors are black and silver, for instance.
The character of Corwin himself is one of the most fascinating in fantasy fiction. Corwin is rather like Elric in a lot of ways, and the series shows a definite Moorcock influence: Corwin is a brilliant strategist 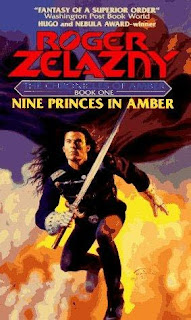 whose greatest advantage is his mind, from a family, a race that is expected to consider other races in the multiverse as disposable cannon fodder, so haughty that even insulting a Prince of Amber means the offender can be killed on the spot. Yet, at the same time, because of his time on our Shadow-Earth, Corwin is "softened," and fights between his natural instincts and his embryonic conscience. In the world of Amber, evil can only be opposed by a better class of evil, and Corwin remarks in THE GUNS OF AVALON that if the day ever comes when evil itself ceases to exist, Corwin too, would be dragged into oblivion.
Corwin is hardly a clean-limbed gallant prince, but a rough, tough scrapper, more Humphrey Bogart than Prince Charming, reminiscent of the brawling he-man heroes of Leigh Brackett. Unlike Elric, Corwin has a wonderful sense of humor: when battling a demon, the demon warns him against using the name to summon him.
"Use it? I can't even pronounce it...!"
The world that Zelazny created was nothing short of astonishing. One of the more incredible sequences features an exact double of the city of Amber, Rebma, located entirely underwater. Astonishingly, the water is entirely breathable by air breathers! Every member of the sons of Amber are equipped with a Trump Deck that enables the family to communicate with each other no matter where they are in the cosmos. What's more, the closer one gets to Amber the less likely things are to work: gunpowder, for example, doesn't ignite in any dimension close to Amber, which gives the warfare on that world an old-fashoined character. 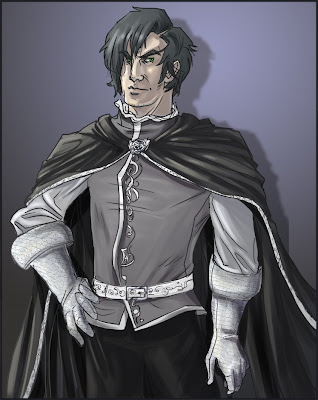 One of the more fascinating sequences involves Corwin and his little irresponsible little brother brother Random zipping through the cosmos in a Mercedes-Benz. They watch the Mercedes-Benz shift and change as they switch between Shadow Worlds, where their brother Julian (nice name!) guards the entrance to Amber. His enchanted silver mail stops their bullets, and his huge hounds keep pace with their car, ripping bumpers off with their teeth.
"It's a good thing his hounds never hunted a car before," Random says, "or else they'd know to go for the wheels."
It's that sort of humor that defines the Amber series. It's not broad Gilbert-and-Sullivan stuff like Fritz Leiber, but a subtle, very venomous and dry kind. It's also the series's best recommendation.
Coming up next: Zelazny's magnum opus, LORD OF LIGHT!
Posted by Julian Perez at 9:53 AM