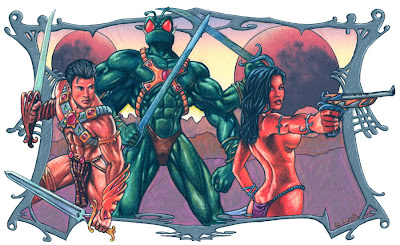 Mostly I'm a fan of Edgar Rice Burroughs's Tarzan novels, who is not for nothing one of the most romantic and exciting characters in all of adventure fiction. But, though it's not common knowledge today, Burroughs was also the "Grandfather" of modern science fiction, telling swashbuckling boys' adventure tales.

There's one easy way to determine if you'll be a big fan of Edgar Rice Burroughs' John Carter of Mars stories. Ask yourself this question: am I a fourteen year old boy?

If the answer is no, then sadly, the moment has passed.

Part of the reason Tarzan is so readable is because of the incredible personage of Tarzan himself and his supporting cast. John Carter isn't quite as interesting as Tarzan is, and so his stories consequently suffer from this. A confederate soldier transported to a dry, dying planet Mars filled with monsters, four-armed barbarians that hatch from eggs, "radium" guns, and swordfights, John Carter eventually seeks and wins the hand of a Martian Princess. 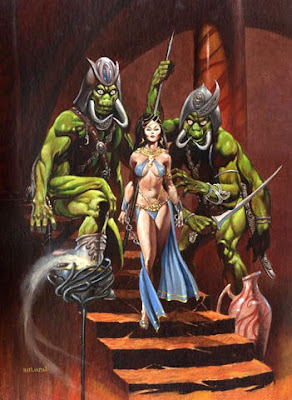 Beats me why John Carter would shlep from one end of Mars to the other to save her. Dejah Thoris was never terribly interesting, and in the great tradition of ERB females, is something of a bimbo whose specialty is behaving wildly out of character in such a way that it creates problems for the hero.

Personally, I always preferred Thuvia, Maid of Mars - who except for La in RETURN OF TARZAN, is arguably the only interesting female character Burroughs ever created. In GODS OF MARS, Thuvia is a woman that has a natural Tarzan-like command of Banths, or Martian Lions. There's some wonderful beast-humor there where she slaps a giant banth on the nose, and the creature lowers its nose and whines penitently like a puppy hit on the nose with a rolled up newspaper! Thuvia is a naturally self-sacrificing sort, and a woman of action - she eagerly leaps off her mount at one point to delay enemies and ensure her friends escape. The final cliffhanger of GODS OF MARS has Dejah Thoris, the insanely jealous Phaidor who wants John Carter for herself, and Thuvia trapped in a hidden chamber that would not open for a full Martian year. Slowly, the door creaks to a close, and John Carter see Phaidor dive at Dejah with the knife, only to have Thuvia jump in its path. Then the door shuts completely.

What an ending, huh? Well, enjoy it while it lasts: Thuvia vanishes entirely in the next book, and by the time she gets her own book, THUVIA, MAID OF MARS, Thuvia is depressingly reduced to the usual role of female hostage in need of rescue. There was one particularly irritating scene in MAID OF MARS where Thuvia allowed herself to be captured. 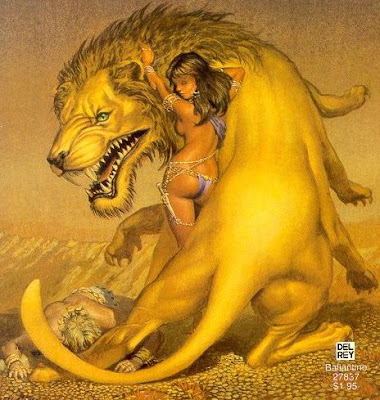 Edgar Rice Burroughs had a habit of creating fascinating side characters that never get the spotlight treatment they deserve, and Thuvia is hardly even the worst example. How about the strong, handsome native warrior Mugambi, who in TARZAN AND THE JEWELS OF OPAR was quite willing to protect Jane with his life when Tarzan was away, and pursued her kidnappers? He was described as "a fellow of great physique and intellect." And going back to Mars for a minute, what about Tars Tarkas, John Carter's green Martian friend, the only one of his friend to know feelings of love? Or Xodar, John Carter's friend in the Black Pirates of Omean, a great swimmer besides?

I used to eat and drink Burroughs, although since discovering Leigh Brackett and her version of gutsy sword and planet tales, it's been hard to look back at Burroughs. Brackett's men were wonderfully tough, part private dick, part cowboy, part gangster, the scruffy Han Solo character archetype decades early. And she could be creepy and atmospheric, something Burroughs, too much a romantic, never let himself be. Sure, Leigh Brackett was inspired by Burroughs just like a whole generation was...but just have a look at NEMESIS FROM TERRA to see a student that is greater than the teacher.

You should devote an entire blog to Brackett. Just try to focus on her works besides ESB, which we already know is good.