FORCE, DRIVE, RANGE, SCOPE, POWER...BUT ABOVE ALL ELSE, ABSOLUTE INTEGRITY 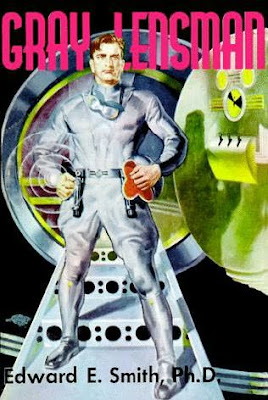 Novels are great, comics are dandy, but there is nothing, I mean nothing, like a movie.

Chapter Four Million in "stuff I always liked, but now everybody's paying attention to it because there's a movie in the works" kicked off with a bang when E.E. Smith fanboy/plagiarist J. Michael Straczynski revealed he was going to do a Lensman movie.

All I can say is...Klono's tungsten teeth and curved carbduralloy claws!

Well, finally: a science fiction movie I can take my Grandpa to see!

Read about it here.

I hope they do it sort of retro-style. That's the thing I liked best about the Lensman books was how this was a very retro-style universe with absurdly charming 1930s dialogue, where they say a ship has "more legs than a centipede." And when was the last time anybody ever did a flit? Not since World War II. The ships of the Galaxy Patrol are made with superadvanced micro-minature vaccuum tubes.
Weird creatures, ray guns, and the most hypercompetent space heroes this side of Lazarus Long. Each of the Lensman is a miniature Doc Savage with an unforgeable, invincible bracelet acting as universal translator, that's the extension of his mind itself.
There are unforgettable characters in this series: the weird Z-Lensman (a creature so weird he has to be seen to be believed), Nandreck, and Worsel, a giant dragon with eight eyes, that is a warrior-scientist with terrible mental power. I can't wait for the villains: the Wheelmen, space pirates led by a super-scientist, the sick Overlords of Delgon (like crocodiles with apish heads) that suck human life force.
Battles with planets crashing into each other, millions of rocketships...
Yep, I'm really stoked. Here's hoping Ronny Howard and JMS make it as good as it could be. Clear ether!
Posted by Julian Perez at 12:12 PM