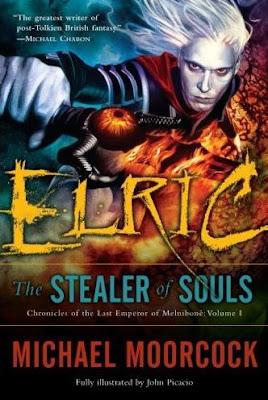 Well, it's about freakin' time.

Del Rey, the guys responsible for those great, complete Robert E. Howard collections, are giving the same treatment to Mike Moorcock and his famous Elric stories. These tales are dynamite supernatural adventure, a place where "nightmare armies assemble for battle and statues scream."

This is Elric as he was originally published in the pages of SCIENCE FANTASY, the short stories that Moorcock eventually blew up to become his novels. If you've only read them in that form (I only read Elric in the White Wolf editions and the DAW reprints), this stuff is familiar but very shocking. The full-length novels explained things like, for instance, how Yyrkoon usurped Elric's throne, how Elric discovered Stormbringer.

This collection features the initial stories as well as the first Elric novel, STORMBRINGER. Some people have complained about Conan the Barbarian, a hero of his statue deserved a Gotterdammerung, a send-off. Moorcock does so in a big way. STORMBRINGER is a grim, Ragnarok end-of-the-world story. It gives Elric what Conan never got, a legendary death that suits him.
If you can only read one Elric story, read "The Dreaming City." It has everything that makes Elric "Elric" (well, except the part where Elric keeps on popping up as a guest-star in Moorcock's less profitable novels when those series need a shot in the arm): Elric's leading a human pirate army against his own people, his grim destiny, the hideous demon-god Arioch, and ultimately, the curse of Stormbringer, an evil vampiric sentient sword with a taste for the blood of Elric's friends and loved ones.
That one story, the first Elric story, details everything Elric is about. His hallucinogenic weirdness (Elric is what Tolkien would look like, if Tolkien took acid).
The specials are terrific: essays by Michael Moorcock where he goes on about his favorite topic, Michael Moorcock, as well as dozens of original covers, STORMBRINGER's first review, and even a story by Moorcock from his fanzine days (it's about as bad as you expect).
The illustrations by Joe Picaccio are gorgeous and really give a sense of fear and atmosphere...though all Joe usually does is paint Elric in an angsty emo pose holding his sword.
You know, I've noticed that illustrators never illustrate the things you'd like to see illustrated about a book. How many illustrators have shied away from doing the blind alien elephant monster from Howard's "Tower of the Elephant?" The single most dramatic scene in Burroughs's "Gods of Mars," where John Carter watches while the door slams shut, Phaidor is about to stab Dejah Thoris, while Thuvia races to the rescue...to the best of my knowledge, I don't think has ever been illustrated.
C'mon, STORMBRINGER had a million different memorable scenes to illustrate: the battle between Elric and Arioch, the friggin' Vulture Lions, Elric vs. a giant intelligent squid god on the deck of a ship, and a cloud of thousands of floating black swords attacking a god like a school of pirahna. None of them were really drawn up.
One artist that bucks this trend is Frank Kelly Freas. I always loved his SHE cover, mostly because it didn't spoil the peak scene with Ayesha naked in the fire.
Posted by Julian Perez at 1:25 PM