If you want to read Guardians of the Galaxy, where should you start? Recommended reading list 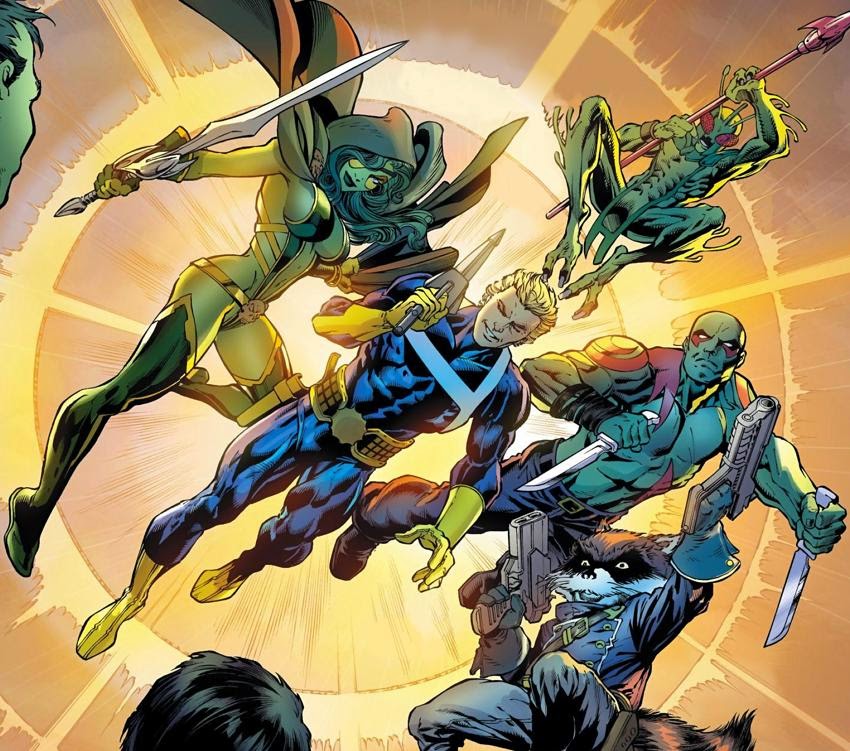 People say, "hey, Julian, I love the Guardians of the Galaxy movie, and I'd love to read the comics. I'd like to get into that whole corner of Marvel Comics. Where should I start and what should I read?"

Well, as a public service, here's my somewhat complete list: 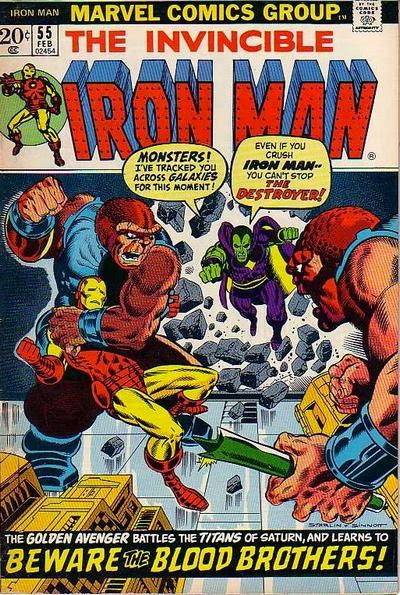 IRON MAN #55-56 (Starlin, 1973). An unlikely place to start, but it's got the introduction of Drax the Destroyer and Thanos, a great beginning for Marvel's "space/cosmic" corner. Reprinted in ESSENTIAL IRON MAN VOL. 3.

MARVEL TWO-IN-ONE #4-5 (Gerber, 1974). Features the original version of the Guardians of the Galaxy teaming up with the Thing and Captain America to take down the reptile Badoon who conquered the solar system. Reprinted in ESSENTIAL MARVEL TWO-IN-ONE VOL. 1. 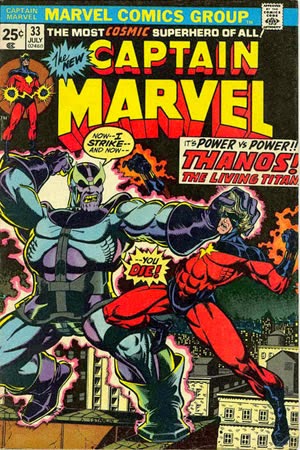 CAPTAIN MARVEL #26-33 (Starlin, 1974), AVENGERS #125 (Englehart, 1974). The first Thanos War, maybe one of the biggest Avengers story to that point, where Thanos obtains the Cosmic Cube. All of the big space stories will follow the lead of this series. Reprinted in ESSENTIAL CAPTAIN MARVEL VOL. 2. 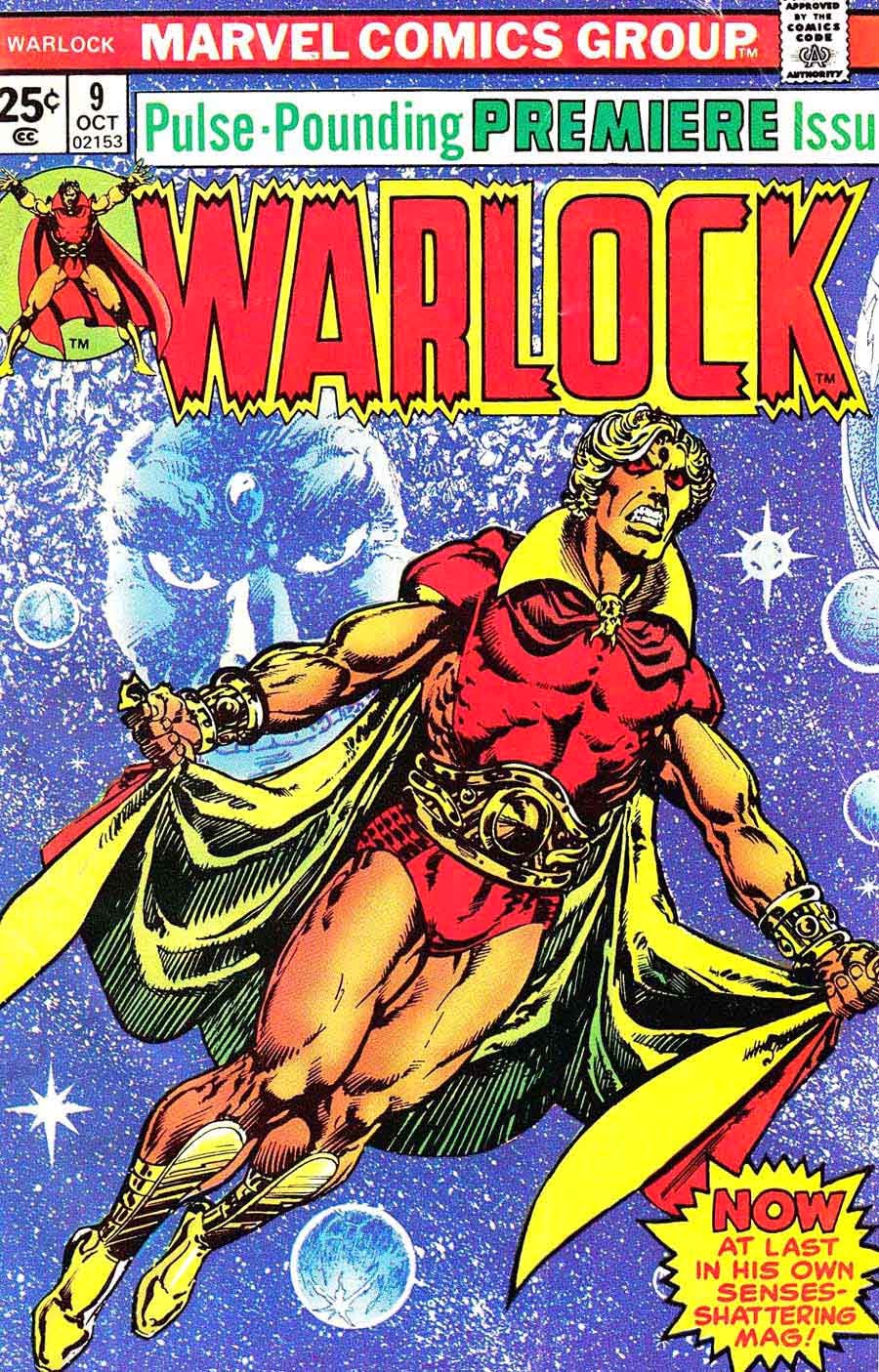 STRANGE TALES 178-181 (Starlin, 1975), and WARLOCK #9-15 (Starlin, 1975-1976).Adam Warlock in space vs. the Universal Church of Truth, an evil religion. Sarcastically known as the "Adventures of Adam Warlock, Space-Christ." Features the introduction of Gamora and Pip the Troll, who was kinda the Rocket Raccoon Mark I. Reprinted in WARLOCK BY JIM STARLIN: THE COMPLETE COLLECTION. 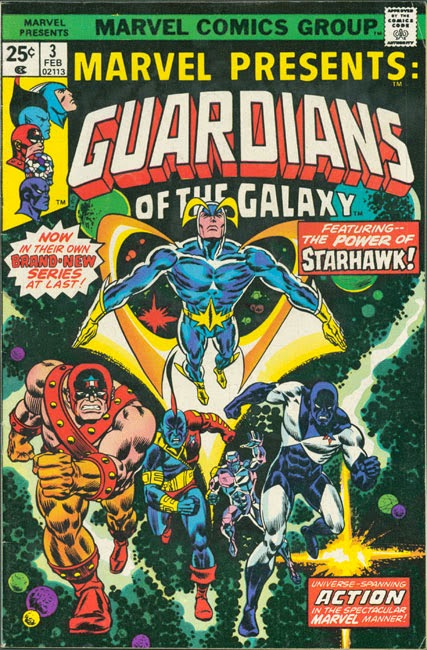 MARVEL PRESENTS #3-12 (Gerber, 1976-1977). Bingo! This is the right place to start when reading about the "classic era" 30th Century version of the Guardians of the Galaxy. A word of warning: it's a very melancholic, sad, trippy book where all the heroes are last survivors of their species. Collected last year in the GUARDIANS OF THE GALAXY: TOMORROW'S AVENGERS for Kindle. 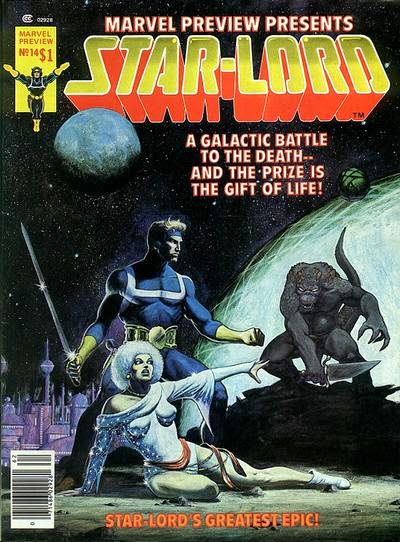 MARVEL PREVIEW #4 (Englehart, 1976), MARVEL PREVIEW 11, 14-15, 18 (Claremont, 1977). These are the earliest appearances of Star-Lord. Brace yourself, it’s VERY different, especially the first appearance, which had weird astrological concepts. Especially recommend 14-15, 18 due to the John Byrne art. These issues are super-rare and hard to find. Star Lord’s earliest appearances, thankfully, are collected in STAR LORD: GUARDIAN OF THE GALAXY, which only came out in July. I hear the movies will use a different origin than the one he receives here. 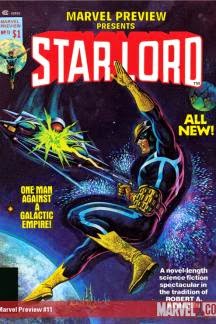 AVENGERS ANNUAL #7 (Starlin, 1977).Introduces the Infinity Gems and Thanos's desire to collect all of them. A great Avengers space epic in its own right. Easily available for a few bucks in back issue bins. 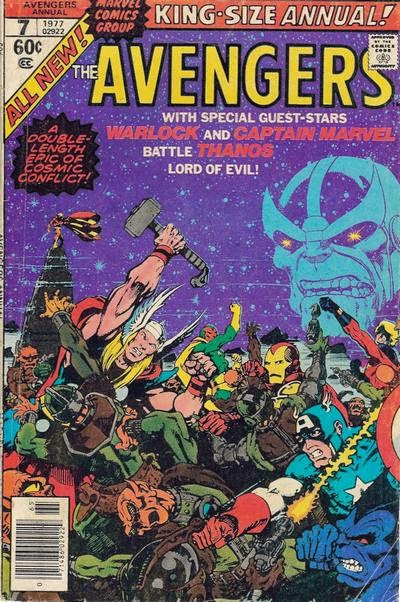 THOR ANNUAL #6 (1977), AVENGERS #159, 167-168, 170-177 (Shooter, 1978).The first big team up between the original Guardians of the Galaxy and the Avengers, the "Korvac Saga." A future Guardians/Avengers movie would logically follow this story. Reprinted in ESSENTIAL AVENGERS Vol. 8 and AVENGERS: THE KORVAC SAGA.

INCREDIBLE HULK #271 (Mantlo, 1982). Good luck getting this one in comic form; ever since it was known to be Rocket Raccoon's first proper Marvel Universe appearance, it's been selling for hundreds of dollars. People love that little guy!

AVENGERS #257-260 (Stern, 1985). The first and most memorable of Nebula’s appearances, she showed up as a tyrannical, ice cold, evil-to-the-core queen of alien pirates who took over Thanos’sultra powerful starship. Yet another story arc you can get cheap in back issue form. 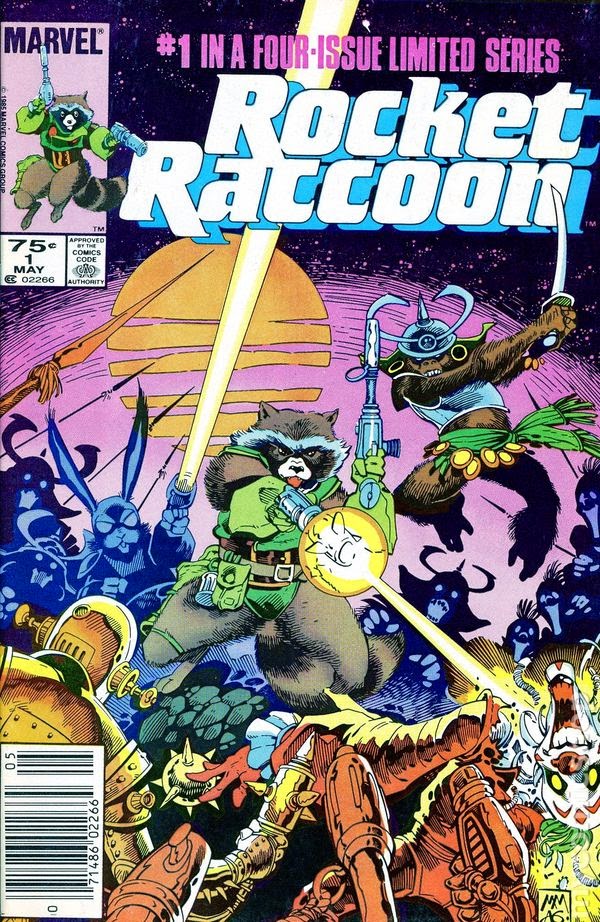 ROCKET RACCOON #1-4 (Mantlo, 1985). Guess who did the art on Rocket Raccoon's original miniseries? Mike Mignola...creator of Hellboy! This is the last time we see Rocket's rocket skates, though. Apparently, that's just TOO silly. This has Rocket as protector of the Keystone Quadrant along with his buddy Wal Russ and his raccoon girlfriend Lylla. I doubt you'll be able to get the original issues since the character became INSANELY popular, but luckily, there is a reprint paperback: ROCKET RACCOON: GUARDIAN OF THE KEYSTONE QUADRANT. 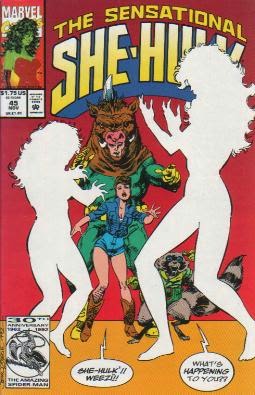 SENSATIONAL SHE-HULK #44-46 (Byrne, 1992).One of the rare appearances of Rocket Raccoon until the revival. She-Hulk was a comedy book prone to reviving weirdo obscuros, bad guys like Scragg: the Living Hill, the Toad Men, and Xemnu the Titan, not to mention using the continuity of horribly dated 70s space trucker comic US-1. So, Rocket Raccoon was a natural choice to show up. Dig into the back issues, you can get this one for cheap. 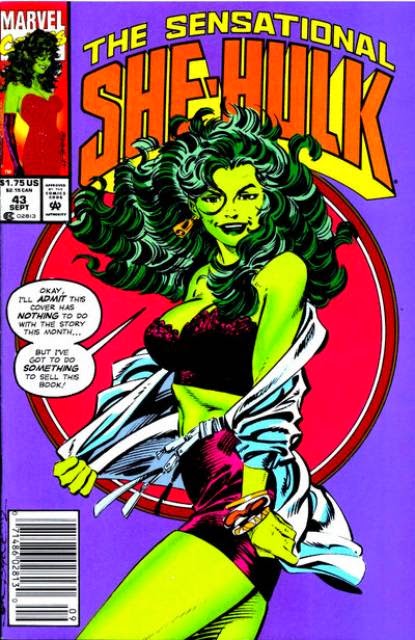 THANOS QUEST #1-2 (Starlin, 1990) and INFINITY GAUNTLET #1-6 (1991). If you can only read one of the two, personally, I prefer the StarlinThanos Quest mini: it’s a reminder why Thanos is the most terrifying guy in the Marvel Universe, and we get so very few villain-centered stories. INFINITY GAUNTLET puts the Marvel heroes, but especially the "space" guys like Silver Surfer and Adam Warlock, against a newly omnipotently powerful Thanos. 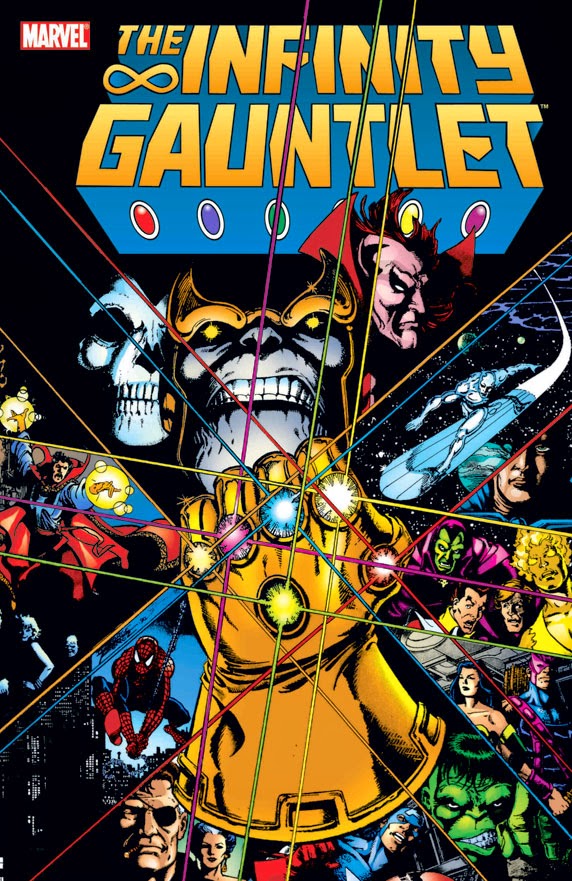 ADAM WARLOCK AND THE INFINITY WATCH #1-18 (Starlin, 1991-1992). Don’t tell me the Infinity Watch wasn’t the inspiration for the current Guardians of the Galaxy series. They have three out of their six members in common.

THANOS #7-12 (2004).The return of Star Lord to the Marvel Universe!And his first mysterious "death" cooperating with Thanos to imprison the evil lost Herald of Galactus, the Fallen One. This is also the story where Star Lord’s element guns and sentient ship were destroyed, a big part of the original version of the character, both of which haven’t been seen again.

DRAX THE DESTROYER #1-4 (2005). This series featured Drax the Destroyer acquiring the new red tattooed body seen in the first series. 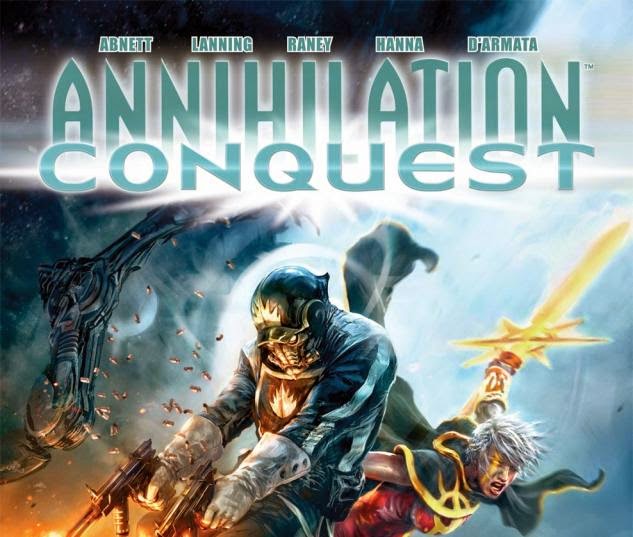 ANNIHILATION: CONQUEST (Lanning, 2007). A sequel to Annihilation, it is this series that directly resulted in the new Guardians of the Galaxy series that was the foundation of the movie, and featured the first story of the team we call the Guardians today. 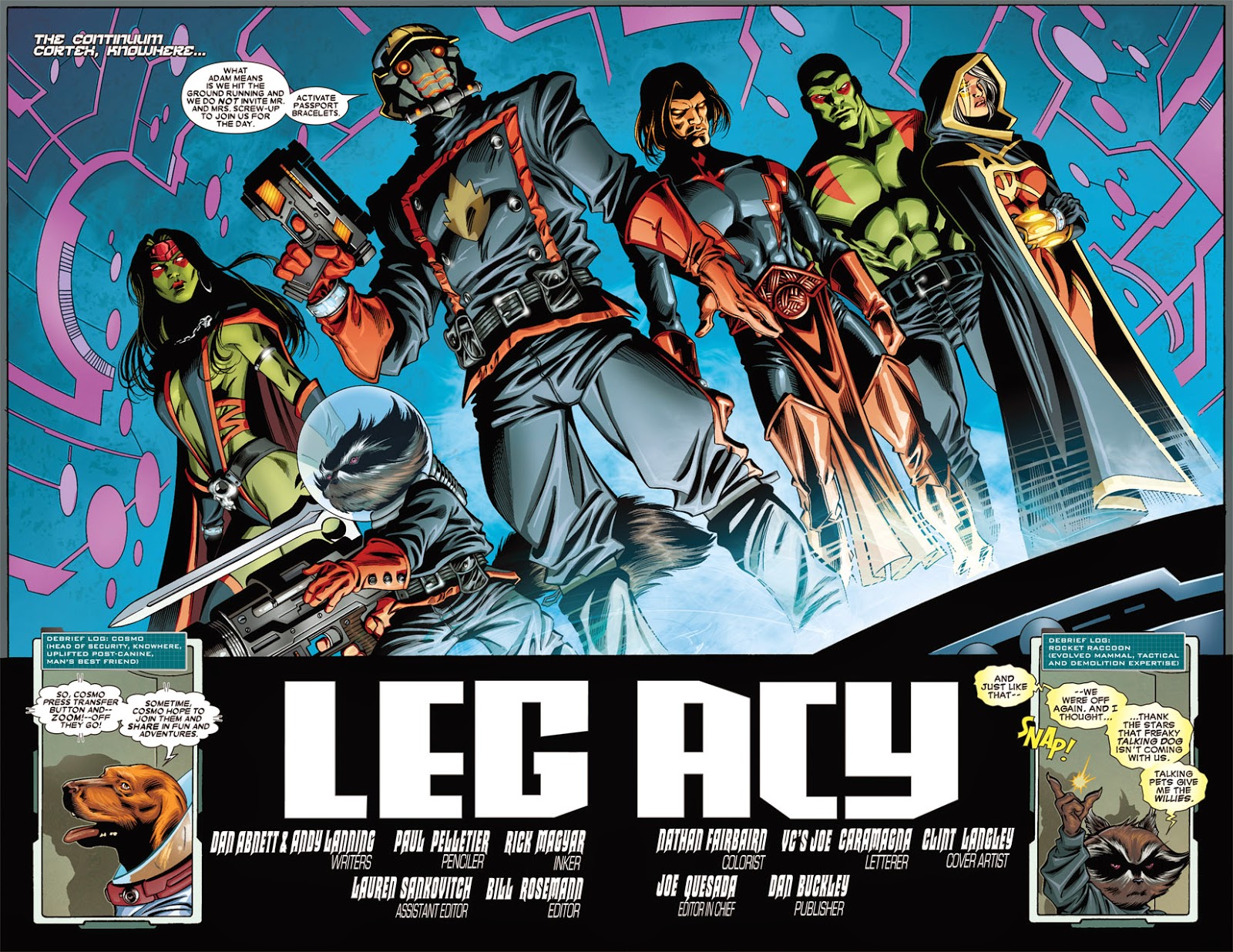 GUARDIANS OF THE GALAXY (Lanning, 2008). This is the series that directly led to the movie – it’s worth noting it was canceled in 2010. Absolutely worth it for Paul Pelletier’s pencils. The comic’s plot threads continued in THE THANOS IMPERATIVE 1-6, which is by the original creative team in 2012, and can be thought of as a Guardians of the Galaxy reunion. THE THANOS IMPERATIVE individual volume collects all of them.

WAR OF KINGS (2009). Set in between the first Guardians of the Galaxy series and THANOS IMPERATIVE, War of Kings is one of the big space storylines and features the  Guardians. It’s a headache to read in individual issues; the collections, available at many libraries, are much better.

AVENGERS ASSEMBLE #4-8 (Bendis, 2012). Star-Lord returns with the other Guardians in this comic series. 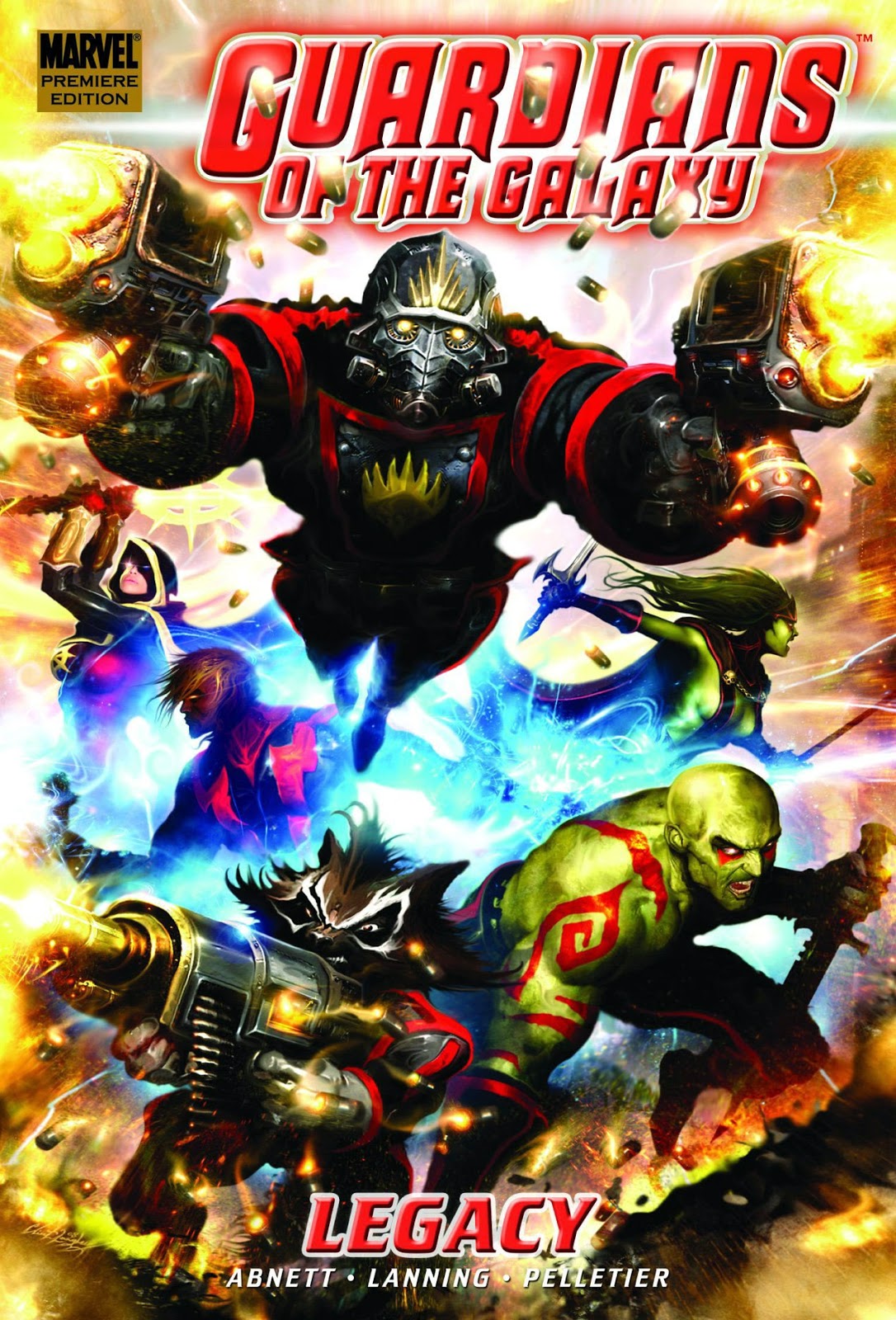 Moving on to the present day…

Ever since the movie, Marvel’s been racing to give people what they want with these new characters.

LEGENDARY STAR-LORD (2014). This series just started. It makes the Star Lord of the comics much more like the guy in the movies everybody liked. 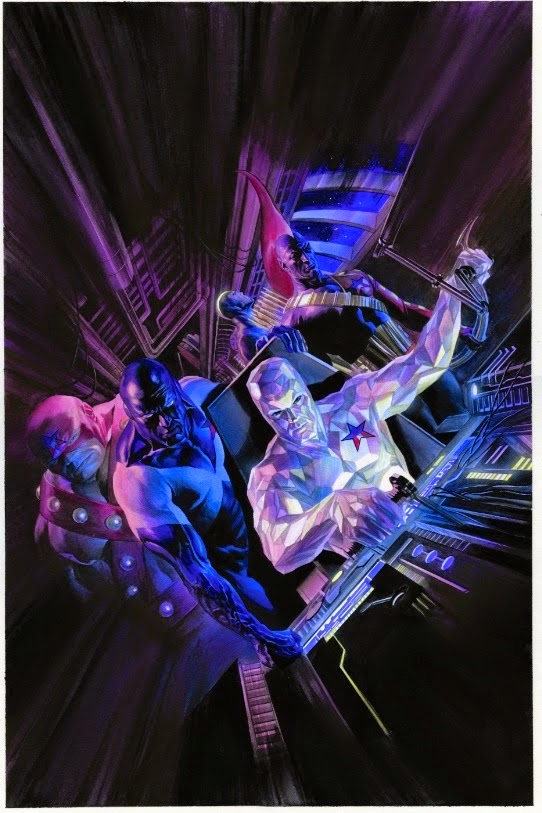 GUARDIANS 3000 (2014). In case you were wondering if the 30th Century Guardians were forgotten in the blitz with the new guys, the answer is no. This series just started. Worth picking up if just for the Alex Ross cover.

There, I think I gave enough recommendations!
Posted by Julian Perez at 9:11 PM

If you need your ex-girlfriend or ex-boyfriend to come crawling back to you on their knees (no matter why you broke up) you need to watch this video
right away...

(VIDEO) Have your ex CRAWLING back to you...?