The reason Doc Smith couldn't publish a sequel to "Children of the Lens" is because it had incest as a major plot point. 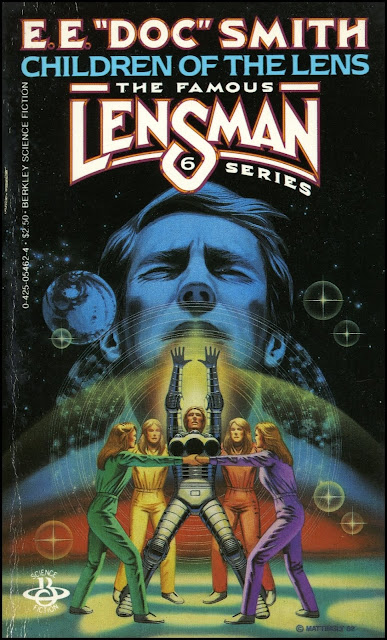 Children of the Lens was full of uncomfortably weird "huh?" moments that hint Kimball Kinnison's children, able to mind-merge and destined to replace the Arisians as Guardians of Civilization, have an incestuous relationship:

The kids were special in another way, too, he [Kit] had noticed lately, without paying it any particular attention... They didn't feel like other girls. After dancing with one of them, other girls felt like robots made out of putty. Their flesh was different. It was firmer, finer, infinitely more responsive. Each individual cell seemed to be endowed with a flashing, sparkling life; a life which, interlinking with that of one of his own cells, made their bodies as intimately one as were their perfectly synchronized minds.

[Mentor] "Your lives will be immeasurably fuller, higher, greater than any heretofore known in this universe. As your capabilities increase, you will find that you will no longer care for the society of entities less capable than your own."


Considering the Children are genetically perfect and arguably aren't even human anymore, this isn't as bizarre or offensive as it sounds.

Still, Heinlein, himself no stranger to incest-themed stories, wrote that Smith intended a continuation to Children of the Lens. In fact, there are even some textual clues in Children a sequel was planned: Christopher Kinnison delivers a flask of force, and it's not clear who finds it, and he states that Civilization is again threatened and that he is just a youth and not entirely up to the challenge. 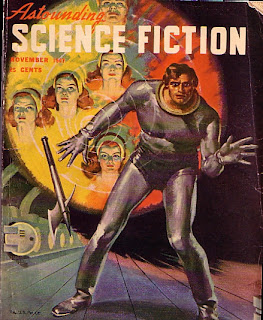 Heinlein said in "Larger than Life" that Smith's Lensman sequel was "unpublishable" at the time. Could it have been because of incest-related themes?

The maddening thing is, we may never know. Smith told Heinlein what his Lensman sequel would be like, but we've never found even a manuscript or outline, and now both men are dead.

Like Heinlein said, "that's his story to tell. You must find your own."

Clark Ashton Smith's "Vulthoom" is set in the Lensverse 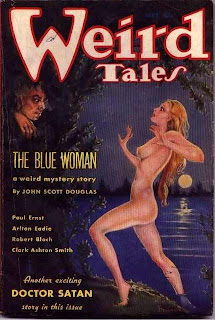 Pulp aficionados love to go crazy and guess which stories cross over, and it helps that reoccurring tropes make a lot of pulp stories very similar (like how most pulp heroes have gray eyes…including Kimball Kinnison, incidentally). For instance, one of my favorite pulp interconnections is that the scarecrow-bodied geologist-archeologist explorer main character in Lovecraft's "At the Mountains of Madness" is really Johnny from Doc Savage.

"Vulthoom" is a science fiction horror story where the primary villain is a tremendously long-lived, mostly unseen, hideously different alien being who is considered the Martian devil. Vulthoom's modus operandi is to operate at the center of a conspiracy with humanoid servitors that never see him directly, who he manipulates by using their self-interest. He has tremendous mind powers and is capable of conjuring psychic illusions. What's more, his chief weapon is exotic Martian narcotics, which he distributes and uses to control others. 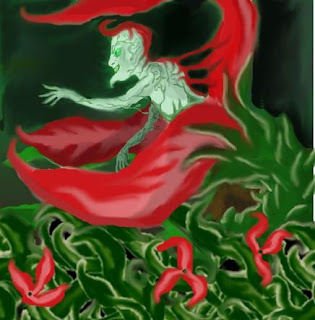 Doesn't this sound like Boskone's modus operandi to a T?

Vulthoom even has a secret base hidden deep underground below Mars (shades of Helmuth's base!), where he is constructing a fleet of interstellar warships unseen by law enforcement.

The Mars seen in Vulthoom is consistent/identical with what we know about Mars from Triplanetary: a long-time Earth ally with a tremendously long, unknown history, a dying ancient culture. Earthmen visit often, but we don't really understand the inscrutable Martians.

The Alhai, giant and monstrous with withered faces, are not exactly biologically similar to Martians in the Lensverse, but that's actually a plot point: in the story that they are bigger and genetically altered and even the main characters acknowledge they look nothing like normal Martians.

Oh, and by the way: the hotel where earthmen stay is called the Tellurian Hotel, incidentally, with Tellurian being the Lensverse name for Earthmen.


Yes, women CAN use the Lens.

"Your report is neither conclusive nor complete." 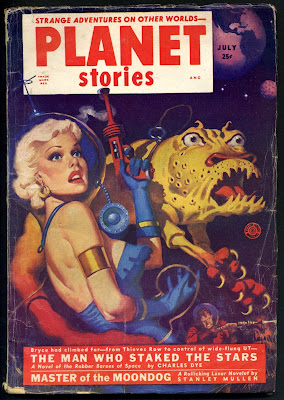 Sean Barrett, in GURPS Lensman, said flat-out that no humanoid female could use a Lens. He based this on Virgillia's speech in "First Lensman" for why she was rejected for a Lens.

One thing should be pointed out: Virgillia Simms' explanation for why she didn't get a Lens in "First Lensman" was her interpretation of what happened, not something she was repeating verbatim from Mentor.

Nevermind we SAW women use a Lens: Clarissa, in Second Stage Lensmen. In the David Kyle continuation novels, another woman becomes a Lensman: Lalla Kallatra. Kyle stated women could use the Lens, but they were rare to the point of being unheard of.

In short, there's no conclusive proof there are no women Lensmen, but we have several right in front of us. The belief they aren't is a "Black Swan" fallacy: because all of the swans we see so far are white, there can't be a black swan. 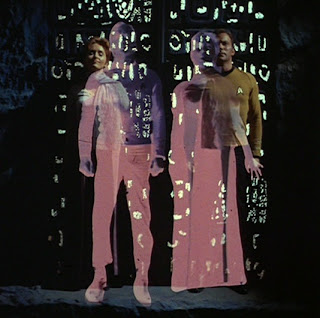 The belief women can't be Lensmen based on Virgillia's speech reminds me of how, for a long time, there was an attitude women couldn't be starship captains in Star Trek because of Janet Lester's belief in "Turnabout Intruder." Why are we accepting here at face value the point of view of a mentally disturbed, crazy person consumed by envy?

Always thought no female Lensmen was a cop-out, especially as Jill mentions one in that very speech, and while she says there will be only one, we have textev for five in that IIRC the Kinnison daughters can all materialize lenses as needed.

Having said that, Barrett's actual argument is that there aren't any because Mentor won't give any other woman a Lens except Clarissa, which is borne out by the text, as the girls create their own.

It also means it's an arbitrary rule, so doesn't matter in the long run anyway.

Barrett extrapolated based on what Virgilia said, copying Virgillia's speech in its entirety. If you remove Virgillia's extrapolations and guesses, you're left with only one concrete fact: she went to Arisia and was found unsuitable. I think it's unwise and premature to use that to extrapolate that women Lensmen don't exist. Nevertheless, as we never saw any, it's a fair bet if they do exist, they're rare.

The fact Clarissa could use a Lens showed there was no fundamental incompatibility with female minds.

Barrett came up with a needlessly elaborate explanation that it had something to do with population growth being determined by females.

I agree with the incest theory for the Children of the Lens; as for an enemy, well Mentor told Kimball Kinnison that a mad Arisian was booted out of Arisia some 2 million years ago or so... so possible adversary right there. Haven't read the Vulthoom book so can't comment on that one.

As for the women lensmen thing... best guess is that it would have interfered with the Arisian breeding program - every time a Samms woman and Kinnison man (the Kinnison bloodline was always male remember) meet, there's trouble - UNTIL we get to Clarissa & Kimball.

Doh! I read your main post about the Lensman series, wondering why you never mentioned anything about the incest theories. Turns out I should have kept reading...

Now that I've had more time to read through this, there's one other thing I wanted to comment on.

"Barrett came up with a needlessly elaborate explanation that it had something to do with population growth being determined by females."

It's not merely that the explanation never appears in the novels (and I think Doc Smith would've mentioned it if that were the case), it's also that the statistics simply don't back it up. According to the books, Earth graduates 100 male Lensmen every year, so we'll be politically correct and assume that if female Lensman were allowed, there would be 100 of THOSE every year, too. So, assuming that each and every one of these women died in the course of duty without ever producing a child (which is by no means guaranteed - Clarrissa survived, didn't she?), that's 100 fewer individuals in humanity's breeding stock every year.

On a planet that already has several billion women.

As you might imagine, I can't believe that loss would matter diddly-dick in the long run. If 100 women really DID make any difference, Mentor would have also outlawed tobacco and booze, which kill way more than 100 women every year and which are totally legal throughout Civilization.

Ok, the incest thing is bogus. Mentor told the Children that they would have vastly extended lives - just as the Arisians did, in fact (Eukonidor is specifically named in First Lensmen, and later in Children). Therefore, the Children will have more than enough time to 1) bring the other three Star Lines (Worsel's, Tregonsee's, and Nadrek's) up to full Third Stage, as well as time to bring alternate lines up the Third Stage Development as well. We're never given a proper presentation of the status of the Arisians as embodied - so whether or not females as Lensmen were possible may have been an aspect of Humanity solely - I believe some mention was made along the way that though binary gender was the most common, the Palainians (Nadrick's people) had 7 genders, so "female" in that case may have been a question begging term.

In fact, we don't actually know *what* the Arisians looked for in terms of the key qualities of Lensmen - that point was made very explicit in First Lensman, or maybe Galactic Patrol, when the Rigillians were discussed, and then later when the Palainians were cited as being extremely cowardly, and it was a key point in the evolution of Galactic Civilization that Virgil realized that that did not necessarily disqualify them for Lensmanship.

"I have no idea as to the bodily shape or the mental attainments of you, the entity to whom it has now been made available."

"While studying this tape you have become informed that the situation is sufficiently grave to have made it again necessary to force certain selected minds prematurely into the third level of Lensmanship."

"Know, now that the task of your race, so soon to replace us, will be to see to it that it does not fall."

All of these, from the final section of Children of the Lens - presented as the attached note to the future reader - imply that the Children of the Lens are *not* the sole future Guardians, or even of the race of the future Guardians - solely that they act as the Guardians until such time as the full development takes place - which could easily involve the evolution to Arisian levels of all of the races of Galactic Civilization. The implication, in fact, is that the Children were *born* to Third Stage development, needing only training in using such abilities. Who knows? Things get found in lost papers of authors every day - we may yet find notes on the 7th Lensman novel.