How She-Hulk became the character we know her as today 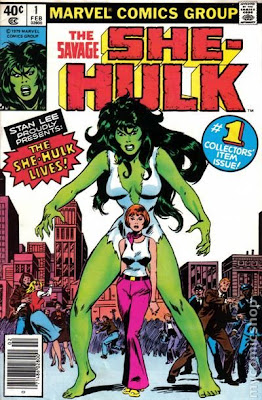 It's interesting to read the David Anthony Kraft original, introductory Savage She-Hulk series, because the earliest take on the character is almost totally unrecognizable to how we know the character of She-Hulk today. When we think of She-Hulk, we see her as  confident, exhibitionist, aggressive, lives-life-with-gusto, who loves getting attention and being superstrong, and despite her shocking giant size and green skin is endearingly normal, an everywoman doing things like watching TV in bunny slippers while eating cheesecake. 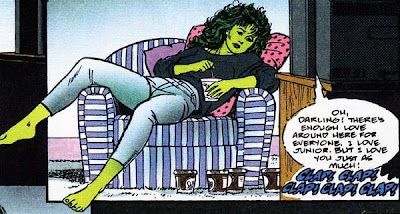 She-Hulk, at least as we know her today, has whacked-out outer space adventures featuring beloved, eccentric, weird Marvel comics obscuros like the Toad Men, Mahkizmo, the return of the Living Eraser, Xemnu the Titan ("I have no mouth and I am mean"), and bizarre supporting characters like the space diner from forgotten space-trucker series US-1 (like the gimmicky Matter-Eater Lad from Legion of Super-Heroes, mentioning and using the canon of US-1 is the whole joke). 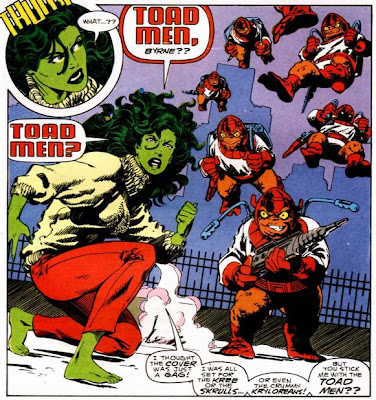 With Shulkie there's always a sense of humor involved. When Steve Gerber's writing, it's the kind of surreal, occasionally dark comedy we associate with Howard the Duck (in fact, not only was Howard the Duck a side character, but so was Gerber's Dr. Bong).

With John Byrne, there's broad comic plots like how he-man woman hater Mahkizmo's sinister plot to kill the female population stops when someone explains to him where babies come from. Not to mention some clever fourth wall breaking sight gags.

(I always figured the "in-universe" explanation for Shulkie at times believing she's a comic character is, she has an extremely weird sense of humor and talks to herself sometimes.) 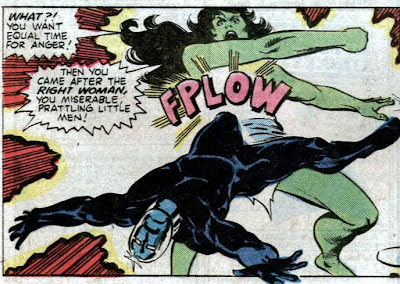 In fact, the earliest series featuring the character is almost shocking compared to the character we know today. The biggest difference between the modern take on She-Hulk, and the "savage" She Hulk is that in her early stories, She-Hulk is a really a mean, intimidating, impolite person, who is very intense and scares people like the gray "Mr. Fixit" version of the Hulk, and constantly has to struggle against her own terrible, savage temper. Her instinct is brutality, but unlike the Hulk, who's just a creature of rage, her emotions and brutal instincts are something she has control over and can resist. 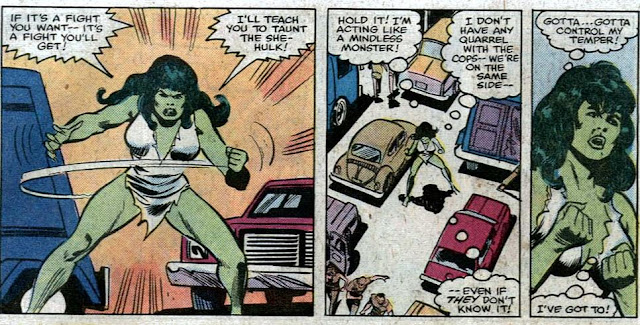 Just look at the image at the corner of her comics. That's a scary Grace Jones face of a lady you wouldn't mess around with, and who certainly wouldn't wear bunny slippers while eating cheesecake. The Savage She-Hulk, unlike the Hulk, has to remind herself that she's no killer, and that killing would make her as bad as the enemies she fights. This is an illuminating insight into Jennifer Walters' psychology because, as all Hulk fans know by now, the Hulk could never kill because Bruce Banner could never kill.

Another difference is, when She-Hulk sees the cops, she runs away. Like the original Hulk and to a lesser extent Spider-Man, she was misunderstood and framed as a murderer, and when people see her they figure she's up to no good. 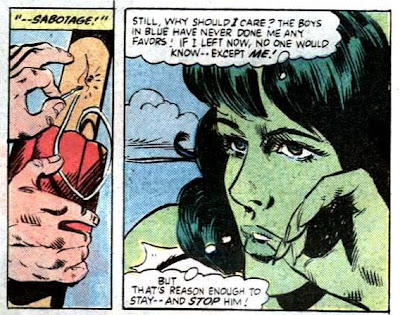 If I were to go for a no-prize explanation for She-Hulk's transformation, it would be as she received her powers from a blood transfusion from the Hulk, her initial transformations were similar to the Hulk: defined by Bruce Banner's anger, outrage, and alienation. 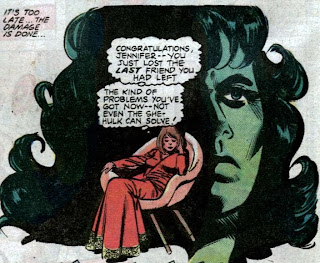 Finally, to someone used to the surreal Gerber take on the character, or the fanciful early Marvel silver age-inspired Byrne years, it can be shocking to discover how downright normal the first She-Hulk book's plots are. She-Hulk has a Spider-Man style supporting cast of perfectly normal people, from her Dad the sherriff who believes the She-Hulk is a public menace, unaware the She-Hulk is her own daughter. The standout, at least to Gerber Man-Thing fans, is Richard Rory, a Roy Thomas look alike who is easily the most unlucky guy in the world. This lends credence to my idea, incidentally, that David Kraft was a Gerber disciple: notice how similar the Scorpio arc in Defenders #48-50 is to Gerber's preceding work.

Most of the stories are about the emotions of perfectly ordinary people like Gerber's Man-Thing, and with She-Hulk's tube-friendly law background playing a huge role and the absence of real super-villains, make me suspect the original Savage She-Hulk seriesmight have originally been meant as a bionic-woman style television series instead of a comic book.

I wonder how the transformation of She-Hulk from Grace Jones "Ms. Hyde" to sex-bomb "everywoman" took place.

There are many examples of characters who get sexier, younger, and slimmer when nobody's watching (Miss Piggy and the Wicked Witch of the West come to mind), but what's unique about She-Hulk is what happened in popular culture between She-Hulk's first series in 1979, and what happened by the time she came back to her own series in the late-1980s: namely, the rise of female bodybuilding as a sport, advertised by very alluring cover girls, pushed by the Weiders as the "face" of a new industry like Rachel McLish and Gladys Portugues. 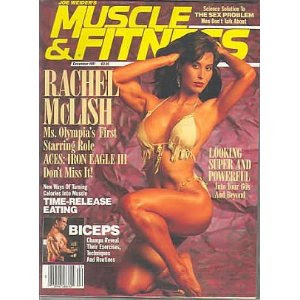 Ask most Baby Boomers about female bodybuilders and they'd probably tell you it isn't biologically possible. After all, Superman had both superstrength and a super-physique, whereas Supergirl was just superstrong. 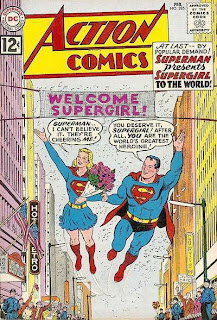 In 1981, the same year the original version of She-Hulk was canceled, the Weiders started the first significant female bodybuilding contest, the Ms. Olympia. Bodybuilding as a sport exists as a promotional venture for the Weiders' fitness supplement and magazine empire, so the creation of female bodybuilding was an attempt to spread to a whole new "product demographic." Therefore, the women featured had to be glamorous, attractive girls…or else who'd want to be a bodybuilder and buy the Weiders' products? 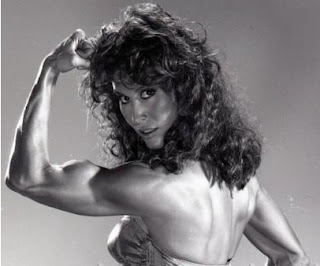 Muscular women were not new (check out Abbye Stockton from the golden age of muscle beach!) but the importance of them as alluring cover model types was new. Bodybuilder Kike Elomaa, the only woman to ever beat Rachel McLish back in 1982, became a pop star in her native Finland and is currently a member of the Finnish Parliament. (I am NOT making that up.)

Female bodybuilders as models designed to sell the product of fitness came to a high point in the early to mid 1990s with Sharon Bruneau, a half-French, half-Canadian Indian who actually, literally was a former fashion model who switched to weightlifting for kicks. 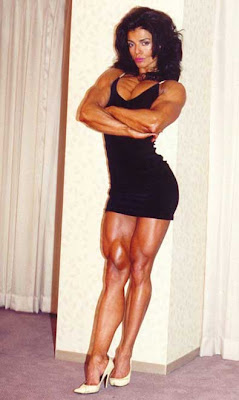 Female bodybuilders were basically sex-sells advertisements for the Weider empire, and it's a funny thing about advertising: it creates demand where there wasn't any before. After all, the entire idea of halitosis was created to sell Listerine.

What was that line from Mad Men? "What you call love was invented by guys like me to sell nylons." 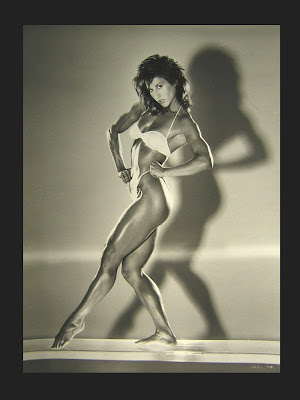 Come 1984, pro competitor Anita Gandol posed nude for Playboy magazine. The very year John Byrne brought back She-Hulk, 1989, the TV show American Gladiators debuted, and one of the selling points and most memorable trait were the foxy lady bodybuilders. 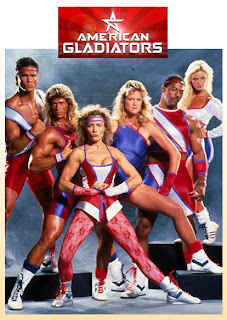 The fun, cheesecake-y Marvel Swimsuit Illustrated had a great text piece about Shulkie written just like a female bodybuilder physique piece in Flex or Muscle & Fitness.

And didn't anybody else notice most covers of Shulkie from 1981 on basically have her in a pose and build that looks like it was traced from a Rachel McLish magazine cover? 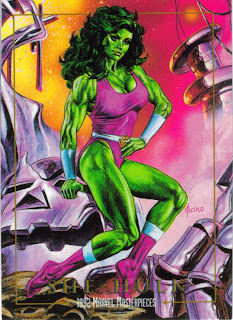 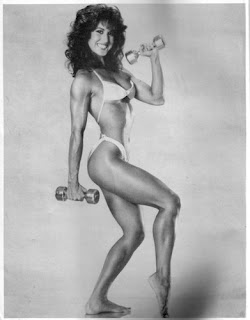 To be clear, in the telephone game that is superhero comics, no one single person is responsible for the change-over to the "funny exhibitionist" She-Hulk, which is my point: the change in thinking about the character was gradual as pop culture changed around them. Typically, Roger Stern gets credit in his Avengers run for the modern She-Hulk as a glamour gal who enjoys having superstrength and isn’t an antisocial outcast (a take Byrne and Gerber inherited and rolled with) but even by the end of the David Kraft version, She-Hulk did occasional things like have fun at the beach with her powers, and described being the She-Hulk as addicting. 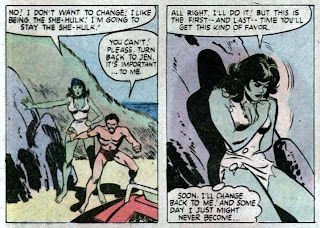 In conclusion, the principal reason She-Hulk went from an intense and oddly Grace Jones-like asexual character to being a much more popular sex bomb over time was because after the original series ended, advertising forces made female bodybuilders attractive and glamorous figures in order to sell products, a marketing force for which Shulkie was an accidental beneficiary. For the first time ever, a character like She-Hulk could have sex appeal as a major part of her character. 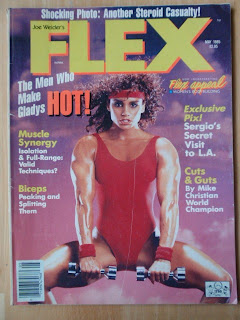 The surest way to cure yourself of naivete is to read up on the history of marketing. Don't think you can be manipulated by advertising? Great. That just means you don't know how it works and can be played like a fiddle by it.
Posted by Julian Perez at 10:20 PM

Need To Boost Your ClickBank Banner Traffic And Commissions?