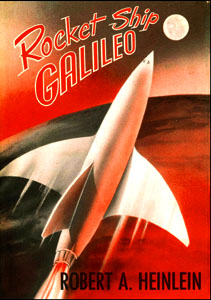 Rocket Ship Galileo was written in 1947 and yet it spoke to me for many reasons.

The book is about some American kids who, with traditional Yankee know-how, develop a rocketship in their own backyard to travel to the Moon. As astounding as that premise is, Heinlein makes you believe in it and here's why:

The boys are shaped by a defining event that changed their entire worldview. A couple years before, they heard about the atomic weapons used on Hiroshima and Nagasaki.

The boys are "bitten by mathematics, science and engineering like it's a bug," with a rapacious, devouring hunger and greed for knowledge. As a person with a science background I've never heard it put better.

The boys have clueless parents that just don't get it, though. It's not that their parents are stupid, it's that they don't understand how the world changed in 1945 with the power of the atom and still have that old way of thinking that means they just don't "get" the boys.

The book was written in 1947 but it's easy to see how a lot of people today can identify with it. I certainly can. I have absolute genius and brilliant parents with PhDs…but who need help plugging in their wifi network and they think everyone on the internet is some kind of rapist. People that are older and younger than myself probably had and (are having) similar epiphanies about science and technology those more set in their ways don't get. 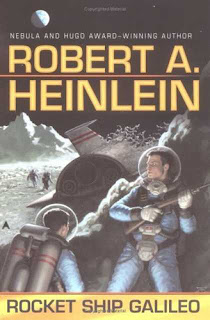 In fact, when I went to visit older relatives for Thanksgiving, I remembered it's been a while since I've seen anybody with actual DVDs in their home. The technology seems so old fashioned. Not because it's been superseded by some other format like HD-DVD or Blu-Ray, which are just steps sideways and equally old-fashioned. But because of streaming, technology like the iPod, and online software purchases, it seems downright retro to require a physical format at all to "own" some media.

Reading Rocket Ship Galileo, Heinlein's first novel ever, is a little shocking because it's hard to imagine Heinlein as a young person. I'm so used to him being the dignified, classy old man of science fiction not unlike his wise old man characters. For one thing, it's one of the few stories of Heinlein's to show the energetic fan-boy enthusiasm and influence of E. E. Smith, with the plot having some similarities to Smith's Skylark of Space, another novel about All-American amateurs who build their own rocket ship.

Smith had a lot of passion but he was very amateurish – Skylark was an awkwardly written adventure story. "Rocket Ship Galileo," even at that early stage of Heinlein's career, was about something.

(Interesting side note: Smith published "Skylark of Space" in the same issue of Amazing Stories as Phillip Francis Nowlan's "Armageddon 2419," the first Buck Rogers novel. In fact, Buck Rogers even got the cover over Skylark!) 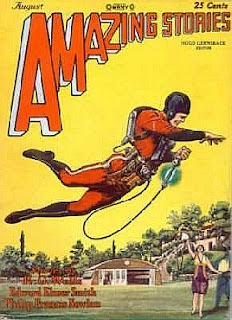 Even Heinlein's usual stock character of the wise old man the hero bonds with and learns from was (are you ready?) a recent college graduate, a cool, hip younger relative who "gets it." You know how they say old age is always 15 years older than you are now?

The main plot comes when arriving on the Moon, where there are Nazis who used advanced rocketry and went to the Moon to plot their return and revenge, which isn't farfetched considering how advanced Nazi rocketry was towards the end.

Recently, I saw the proof-of-concept special effects reel trailer for "Iron Sky," a low budget movie about the Nazis returning from space, a project the creators are trying to get money to fund. This reminds me a little of Sky Captain and the World of Tomorrow, another big budget movie that started as a five minute special effects reel, a film that was tragically overshadowed by the release of Sin City a few months later.

I'm withholding an opinion on Iron Sky because…how can you have an opinion based on nothing? A special effects/proof of concept reel, even a viral one, is just that.


Still, a few warning signs jump out at me from the trailer. One of which is, there aren't any characters in it. Who's the main character, the hero we're supposed to root for? His girlfriend? Is there like a main Nazi leader, like a "Darth Vader" type?

We don't see that, and that tells me the people making this are too much in love with the idea of the story (Nazis from the Moon, an idea which was cribbed from Rocket Ship Galileo anyway) as opposed to the stuff you need when something becomes an actual movie as opposed to a demo reel.

Nice review of a book I loved when I read it as a teen many years ago. By the way, what's the story on the model of the Galileo shown in the accompanying photo? Did you make it?