My Branch of the Wold-Newton Tree 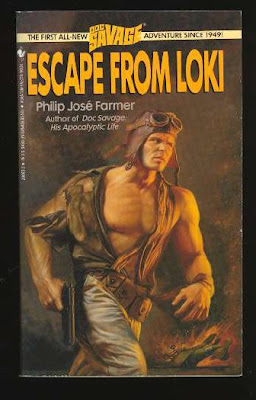 I have a pretty distinct physical feature: a superfluous third nipple.
I don't have any other relatives with it I know of, and I didn't think about it much, until I received a weird request for an interview by Phillip Jose Farmer in 2007, a couple years before his death. PJF wanted to ask me some questions about family history.
This surprised me because #1) I'm not the family historian, #2) my father is, and he's a better known public figure. It only occurred to me later that PJF would get in touch with me first because I sent him some fan mail.
Man, what a thrill, and surprise, to have the macho post-pulpster author of "Riverworld" in my apartment!
I told Farmer how, as a kid, I read "Venus on the Half-Shell." My favorite scene was where, trapped in a Cairo museum in an upended sarcophagus after a flood that kills mankind, the hero is forced to feed the penis of the mummy of Ramses II to his dog in order to survive. Ever since then, I've always speculated what mummy flesh tastes like. I've come to the conclusion it's like a really dry, excessively spiced beef jerky.
At first I wondered if PJF meant to ask me about my distant relative, Lisandro Perez, who was the first Secretary of the Treasury of the Cuban Republic. But no…PJF was trying to compile a timeline of the real people whose identities were obfuscated by fiction. Previously, he'd connected the backstory of fictional characters like Tarzan, Doc Savage, Fu Manchu, James Bond and Sherlock Holmes together in something he called the "Wold-Newton Tree." 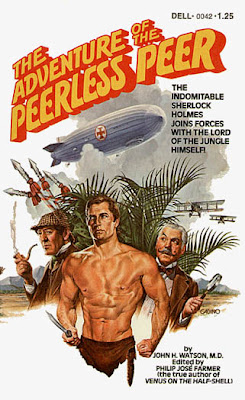 The first question he asked me was about a great-uncle, Hector Francisco Perez. I was unfamiliar with the name, until I remembered my father mentioned a "Tío Paco" a couple times. My grandfather was one of ten children – five of which migrated to the United States after the Cuban Revolution, one of whom went to Spain, and four who stayed in Cuba.
According to Dad, he barely remembered his Tío Paco, who was one of the youngest of that generation, because like my great-Uncle Rubén, he got along badly with his father (my great-grandfather) who was a notoriously serious, authoritarian man from an authoritarian, serious generation: a circus and tobacco company owner.
According to all accounts, there were very serious rumors about why Tío Paco ran away, including that he shot a policeman.
Dad only met Tío Paco once, when he came to visit the family in the city of Miami for a brief time in the early sixties because of his job: teaching trick shooting to a wealthy expatriate Latvian. According to Dad, Tío Paco talked about how he did more than that on occasion, killing on command, and even passed on to his employer his own unsettling habit of shooting through the right eye. This was the way where Tío Paco killed a policeman, his first and most meaningful murder in Trieste, Hungary.
The early sixties meeting in Miami was extremely disturbing, but not an extraordinary one in a family of crazy people. And anyway, it was well known in the family Tío Paco did work for the Batista Regime and later for Castro, and had unwholesome Mafia connections. This background is relatively common to people who were unfortunate enough to grow up in interesting times, and anyway, when it comes to the Mafia most Cubans and Cuban-Americans at the very least know a guy who knows a guy.
That was all Dad knew, though it seems PJF put together some of the pieces together.
"Hector Francisco Perez," according to Philip Jose Farmer, was the real name of the Cuban assassin author Ian Fleming later fictionalized as "Francisco Scaramanga," also called the "Man With the Golden Gun." 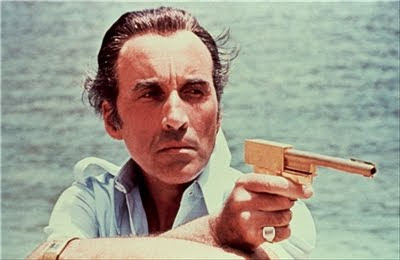 Even more incredibly, Farmer turned up proof the "Man With the Golden Gun" appeared once before in Ian Fleming's James Bond stories. On that previous occasion, he was under a cover identity incorporating his real name, as the hired assassin Hector Gonzales in the short story "For Your Eyes Only." There, Hector Gonzales was the killer who, under orders from von Hammerstein, murdered the Havelocks. James Bond did shoot Gonzales, but under the chaos of the shootout Hector's death was never definitively confirmed.
An innately vengeful person good at keeping grudges, but unsure which MI-6 agent shot him during the Batista years, Hector Francisco Perez took special relish in killing every double-0 agent he would later come across just in case it might have been the man who shot him in Vermont. 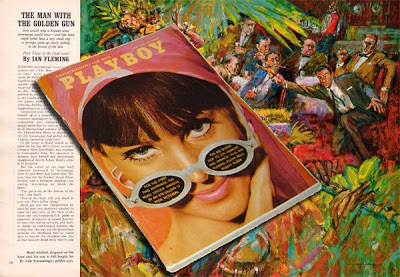 Based on what I told him from family history, PJF put together one later occasion where "Hector Francisco Perez" just missed interacting with the famous 007. The "wealthy Latvian expatriate" he worked for in Miami was Auric Goldfinger, who "Scaramanga" taught in shooting. Hector Perez and Goldfinger first met through the Spangled Mob, who were, at the time, assisting Goldfinger with Operation Grandslam and who also regularly made use of Hector's assassination skills.
It was from "Scaramanga" Goldfinger later picked up his distinctive means of execution: shooting through the right eye (the way Scaramanga performed his first kill). In turn, it was from Goldfinger "Scaramanga" picked up his trademark gold bullets. The gold-plated firearm, incidentally, was a gift from Goldfinger to his shooting instructor. 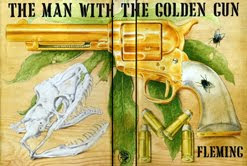 Additionally, I speculated that Tío Paco's strong Catholic streak might have come from his sister (my great-aunt) who was a Catholic Nun in Cuba.
Here's another interesting coincidence I only discovered later: my friend Alex Niquette in Vermont lives by Echo Lake…at the very property owned by the Havelocks prior to their murder at the hands of "Hector Gonzales."
All of this was a lot to take in, and I thanked PJF both for his enlightening visit and the fiction he produced over the years.
I thought a lot about that meeting in the weeks to come. I'd never considered owning a gun before that meeting, for instance. I didn't worry about personal protection much, and I don't hunt either...mostly because I hate nature and don't like being anywhere near it. Right after that meeting, I felt the urge to get one.
And holding and shooting a gun...well, it just felt right, somehow, that's all.
Posted by Julian Perez at 1:57 PM

As soon as you said "third nipple" and "Cuba," I knew where this was going.

Of course it makes perfect sense that you'd be related to "Pistols" Scaramanga, given your deep resentment toward authority figures and unnatural attachment to circus elephants.

Good to see you've kept up with the Fleming since your initiation via "Moonraker."

You rag on me for possibly being realted to Templars and here you are a relative of a badass Christopher Lee villian?

Yep! If it was good enough for John F. Kennedy it's good enough for the rest of us. When I started getting into Clark Ashton Smith (arguably the most talented of the Weird Tales guys), it was very difficult because the guy has barely in print for the past generation. Fleming is about as easy to find as ERB, Michael Crichton or the Star Wars tie in novels.

Is it possible there are so many Ian Fleming fans because it's easy to be one?

I actually saw the movie Moonraker recently. It was...well, maybe it's not that it's bad exactly, but it was so different from the book in every way it was downright jarring. Reminds me of the switch-over in creative team on Captain America from Steve Englehart to Jack Kirby.

You rag on me for possibly being realted to Templars and here you are a relative of a badass Christopher Lee villain?

That's different. The absence of Julian in the PJF family trees is so horrible, so jarring something absolutely had to be done.

It reminds me of how the Irish tried to write themselves into the Bible.

I consider myself lucky to have climbed on the Bondwagon when I did. In the mid-70s, Roger was the Bond of record and Sean was Bond Emeritus on the ABC Sunday Night Movies, so I took it for granted that there was more than one face and approach to Bond. (Fans older than I was never quite let go of Connery.)

And taking it further, I had no trouble reconciling Fleming's Bond to EON's, though they couldn't have been more different. "Moonraker" was the most amazing spectacle I ever witnessed on the big screen when I first saw it, and I'm not entirely sure that's not still true. But I wouldn't have wanted the same story in a Fleming novel.

Anyway, as you probably know, by 1979, the plot of the book was deemed too mundane (!) for an "event" film, so they went the "ripped from the headlines" route, tying the plot to the debuting shuttle program. It's not EON's fault they turned out to be better at deadlines than NASA, though even 30+ years later we're still waiting for the establishment of a "Space Marine Corps".

It's always been fashionable to bash Fleming as a lightweight, but as a long list of successors have proven, it's not so easy after all to do what he did. I'm reading Jeffery Deaver's "Carte Blanche" right now, and while it has its merits, it's a pale shadow.

"That's different. The absence of Julian in the PJF family trees is so horrible, so jarring something absolutely had to be done.

It reminds me of how the Irish tried to write themselves into the Bible."

at least youre not like Pavel Chekov, who claims the Russians invented everything