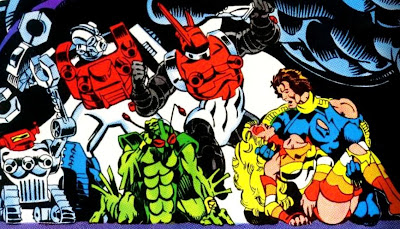 It's official: geeks now rule the entire world.
J.J. Abrams is in talks with Hasbro to make a "Micronauts" movie, and he's bringing with him the writers from the likeable "Zombieland."
Was something like that even thinkable so much as five years ago?
By the way, that nerd-hating Brit Warren Ellis used to slam superhardcore fans of comics by saying "the reason us big time comic creators never listen to you is because all you do is talk about how you want the Micronauts back."
Well, who's laughing now, you limey beardo?

Ellis used the example of the Micronauts – the nerdiest property imaginable – to point out how hardcore nerd fans only like what they're comfortable with, and never support new ideas. I've always found this case to be meaningless because it's possible a clever redoing of an old property can have tons in the way of creativity and novelty, but an "original concept" that isn't all that original can have absolutely no creativity, soul or heart in it whatsoever.
Ellis made his case in 2001 or so, when Micronauts, like Tron, was a punchline: a forgotten eighties property beloved only by the most hardcore nerds.
How things have changed in the past few years. Tron received a big-budget sequel that did relatively well, and comic book movies, which previously worked by ditching the high-concept stuff cowardly studio heads feel turns off the Joe Sixpacks and Jane Wineboxes, have instead embraced the stuff ultra-hardcore fans love: genre-bending worldbuilding and continuity nods. 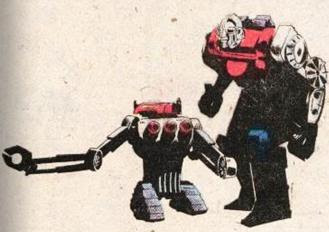 Maybe I'm gloating a little. Well, I can't stand Warren Ellis and others who demean the hardcore nerd fan audience in favor of "newbies," and besides, one of the great things about being ahead of the curve is you get to brag a little when everybody else catches up.
As for the Micronauts movie, I'm excited as hell if this happens...even if it does mean, if it's based on the Hasbro property, that Bug, Arcturus Rann, and Marionette are going to be absent, as will the cameo by the Marvel Universe's Psycho-Man, who was a major villain of the series.
If the movie has the robot Biotron, serpent-tanks and Baron Karza transforming into a rocket centaur….baby, I'm there on a bear.

Micronauts was an imaginative and impossible to dislike Star Wars-esque space opera property about a "microverse" inside an atom conquered by a black-armor wearing malevolent scientist named Baron Karza with an alternate mode as a cyborg centaur, and the rebel heroes on the run who oppose him. The heroes include Arcturus Rann, a Buck Rogers-esque space explorer unfrozen after a thousand years; Marionette, a princess who survived by pretending to be a robot, Prince Acroyear, an ultra-strong prince of a proud, martial warrior-race who never removes his helmet and armor, Bug, a fighter, crowd-pleasing wiseass and master thief from an insect race with cool bug powers (I'm sure the fact Bill Mantlo is well known as a Spider-Man writer is entirely a coincidence), and Microtron, an R2-D2 esque feisty, courageous "cute robot" who finds himself in the midst of battles saying "this is no place for a little robot!"
The "hook" is that when entering our world from the Microverse, the Micronauts are several inches tall…the size of their action figures.
The series has a lot of cool science fiction ideas and visuals. The planet of the Acroyears is a living rock-world, and Bug has a bug girlfriend who shouldn't be sexy…but thanks to Howard Chaykin, totally is!

My favorite character is probably everybody else's favorite, too: Bug, a cutpurse, cocky wiseass insectoid who was a former gang-leader on his bug home planet. The best story of the series comes when Bug returns to his homeworld and leads his gang against his own crooked father who took over in his place, and then urges his gang against their planet's colonial garrison. A lot of women have told me they think Bug has a lot of sex appeal, in the same "unusual" way Nightcrawler has a lot of female fans. 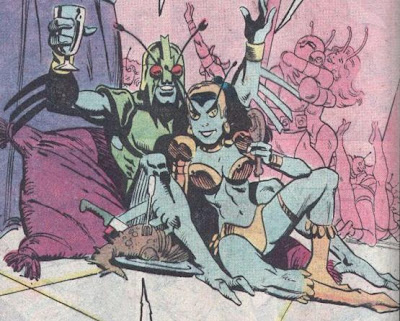 With a lot of stories about an evil, tyrannical empire, I always wondered what could possibly compel anyone to become their cannon-fodder, disposable stormtroopers who's lives are basically meat for the grinder. Here in Micronauts, there actually is an explanation. The villainous scientist Baron Karza achieved power over society by inventing cloning and organ transplant technology to keep people young, healthy and immortal (at the expense of the body parts of others). In other words, becoming a soldier of his is an easy way to achieve immortality. 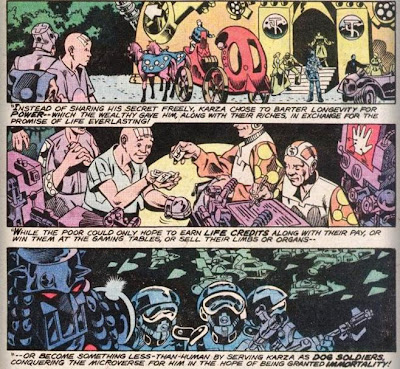 There was one element of the original Micronauts series I think is deeply relevant in the age of Occupy Wall Street and the protests of the 99% who can't get by: the wealthy and elite supported Baron Karza and in return lived a parasitic existence, kept immortal and young by literally stealing the body parts of the poor. 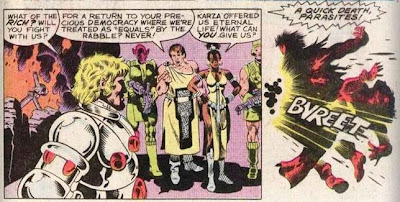 See that? Damn, not even Sergei Eisenstein got that hardcore.
It helps, by the way, that Bill Mantlo had a social conscience became an attorney and public defender for the Legal Aid Society, which provides legal counsel for the indigent and homeless. A good counterpoint to many comic authors, who, just like science fiction writers, tend to favor a self-absorbed Heinlein-esque libertarianism.
I've often wondered why vampires have become so popular and their portrayal so alluring and sympathetic since at least the mid-1980s, and the answer occurs to me: since the rise of the "greed is good" Reagan eighties, our sympathies have first and foremost been with predators.
One of my favorite bits was how Mike Golden, without consulting anybody, actually created an entire alphabet for the Micronauts comics. 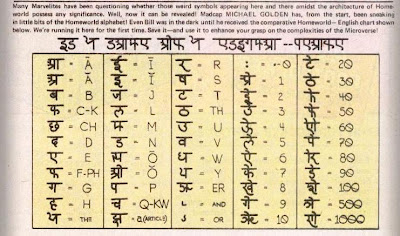 Bill Mantlo loved Micronauts and its concepts enough he took its ideas and applied them elsewhere. For instance, Peter Parker once assumed the Captain Universe identity. 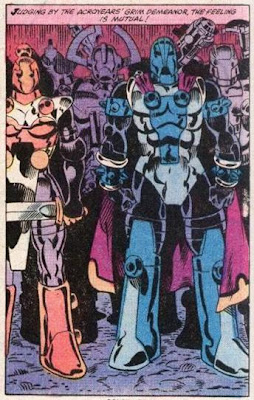 By the way, I always wondered if the race of Acroyears inspired the Mandalorians in the Star Wars expanded universe. Sure, the Acroyears are hardly the first proud warrior race ever, but they certainly are the first proud warrior race to wear distinctive and individualized armor and helmets and never show their faces. The Acroyears first appeared in 1978, two years before Boba Fett's first appearance. Hmmm...!
If so, that would be hilariously karmic because of numerous accusations of plagiarism levied against Bill Mantlo over the years, including his theft of a Harlan Ellison "Outer Limits" story. According to legend, Jim Shooter prevented a lawsuit by merely giving Ellison a lifetime subscription to all Marvel comics instead. The accusation was also made that Mantlo borrowed from an in-production graphic novel about the Hulk which would debut a background with Bruce Banner's abusive childhood resulting in pent-up rage issues. Mantlo took that background and beat its debut to the punch in issues of the regular comic. In fairness to Mantlo, he might have seen the photostats for the graphic novel and just figured that was the new continuity and status quo.
Likewise, Micronauts is very similar to Star Wars, but that's so ridiculously obvious I don't need to say it. Arcturus Rann's background in particular as a space explorer in suspended animation for a thousand years whose voyage was superseded by faster than light travel discovered in the interim, reminds me of Steve Gerber's Vance Astro in Guardians of the Galaxy. In fact, there couldn't be a character with more Gerber-esque, trademark poignancy.
Posted by Julian Perez at 9:35 AM

My favorite character is probably everybody else's favorite, too: Bug, a <.strike>cutpurse, cocky wiseass insectoid who was a former gang-leader on his bug home planet.<./strike> Han Solo-alike.

Also, does it not jump out at you in the panels about becoming soldiers for the sake of immortality that the big bad evil guy's logo looks awfully similar to a swastika?

Sorry blogger played havok with your formatting but you gotta admit that's kind of an overplayed joke on the internet.

Bug was a Han Solo copy for sure (like Microtron was an R2-D2 copy), by way of wiseass Peter Parker. Everyone was such a goody in this book that Bug was exactly what the doctor ordered, though.

I remember hearing that George Lucas originally intended Han Solo in early stages of the movie to be some kind of unusual amphibian alien. Bug gives a sneak-peek as to what that might have been like.

And yeah, that Nazi symbol is the opposite of subtle, though if you look at Mike Golden's microverse alphabet, the symbol is actually that of a C/K sound, presumably standing for Karza.

Good thing the C doubles as a K. Baron Carza? If he was called that, only Italians would pronounce it correctly.

LOVED the Micronauts, at least during the initial Mantlo/Golden run. I signed on because of Mike Golden's art, which says something about how much I liked him. After all, this book was a toy tie-in, a Star Wars clone and a Marvel book. Three strikes right there, but I tried it anyway, and it paid off in spades.

I understand Mantlo worked a similar mirace on ROM, Spaceknight, though I never tried it. It's a real tragedy what happened to that guy, and a real loss to the medium.

Re: Rom, I'm still impressed Mantlo managed to turn a total blank slate (a single toy robot with no background) into a complex mythology: spaceknights, Galador, the Dire Wraiths (by the way, the Dire Wraiths were mentioned as recently as the recent Skrull invasion). It kills me there is, because of licensing reasons, no way to release or reprint Rom.

You only need to look at Gerry Conway's work on licensed properties to see how difficult that can be. How is it something that involves Atari, lasers, and Jose Luis Garcia Lopez is Grandma-skinningly uninspired?

Bill Mantlo had his occasional lapses as mentioned above, but IN GENERAL, he was endlessly innovative and creative. Say what you like about his Spider-Man and Iron Man runs, for the most part, he created and used new enemies as opposed to using Doctor Octopus for the eighth time. And when he did use the classic baddies he used them in ways not seen before, like that story about how the Vulture committed crimes to pay for an extremely lavish funeral for himself.