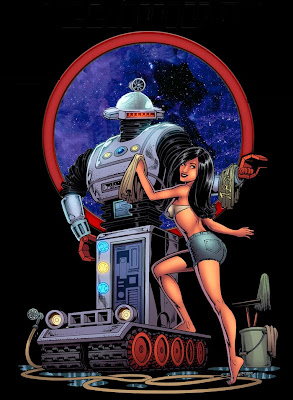 Moonstone Comics, a printer that specializes in books based on pulpy pop culture artifacts like Buckaroo Banzai, the Captain Action toy line, and Lee Falk's Phantom, are right now publishing a comic based on the robot toy line the Zeroids.

The Zeroids were basically early 1960s predecessors of the Transformers. If the Transfomers had versions on Earth-2, this is what they would look like. And from the sound of things, the Zeroids were even cooler as toys, with vehicles that came right with the figure, crazy-powerful interior motors, magnetic power-actions, and one even has an interior set of wires and batteries to make a playset light up. 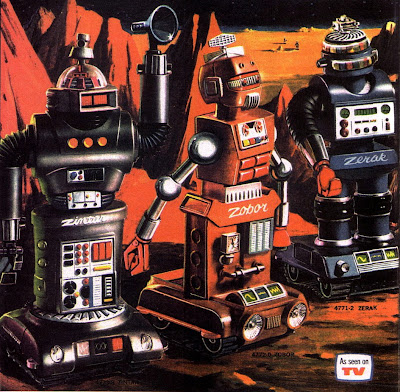 What's strange is that the Moonstone Zeroids comic basically follows the blueprint of the Michael Bay Transformers movie, which might as well be called "People Who Know Transformers," with the main characters being a couple of military guys and Megan Fox. In the case of Zeroids this is a little more okay, since while Transformers was wonderfully peopled to the point there's no excuse for pointless human characters, there's a lot less for Zeroids to work with, a barely filmable toy "line" that has a huge gaping deficiency: no real villains.

I never understood why you can't have the robots be the main characters. Children have an instinctive sympathy with unusual creatures. There was a story where C.S. Lewis got a letter where a concerned mother told him her son preferred Narnia's Lion-Jesus Aslan over the actual Jesus. C.S. Lewis's response was surprisingly rational, along the lines of "of course he does, that's how the minds of little boys work." The logic behind emphasizing human characters is the same mistake that people make when they put little kids in adventure stories: "in order to appeal to little kids we have to have little kids in the story."

The main human hero is basically Megan Fox in every way: a sorority girl who is the daughter of the scientist who originally built the Zeroids. This is unsurprising. If they ever do a remake of the caveman movie 1,000,000 BC, you can bet the main character will be a woman since the only thing anybody remembers about the Hammer film is that Raquel Welch was in it...despite the fact she doesn't really do anything and was a supporting character.

As an aside, I don't actually have a problem with Megan Fox, who was overexposed to the point of annoyance, but was not really a terrible person or actress. Yeah, she didn't turn out a great performance in those movies, but what did you idiots expect? Oscar-caliber performances produced by that well-known actor's director, Michael Bay? 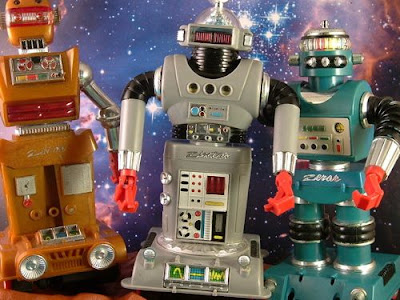 The comic Zeroids: the Return basically duplicates the Michael Bay school of film-making down to very unusual and idiosyncratic elements like uncomfortable race-humor that ends up being borderline racist itself. The book is trying to sell itself on camp, including a zombie invasion (something I doubt was a part of the original toyline). I appreciate it is self-aware enough to understand a book like this works by nostalgia, so get as nostalgic and campy and don't take yourself too seriously. You can either be campy or play it straight, not both, and certainly not a muddled mixture of both like the Bay movies, and I doubt robots that look like this would lend themselves to being played entirely straight.

Because of the emphasis on the human characters and the disaster movie elements, I wouldn't recommend Zeroids: the Return unless you really love the toys and were waiting for something to be done with them like manna from heaven. Still, one thing did interest me: a Zeroids-website owner cropped every picture of the comic cover to exclude the sexy girl, a hilarious act of Calvinist prudery that defies parody.
Posted by Julian Perez at 11:34 PM

Eddie - On the one hand, I understand the storytelling logic for a character who is a normal person like the audience to guide us into the story, especially if the story is filled with unusual things like robots, monsters and fantasy creatures.

After all, despite all the centaurs and talking gorillas of Narnia, the main characters were a few regular kids.

On the other hand...in something like Transformers or Zeroids, I don't see the necessity of it and that may just confuse storytelling types, because I strongly suspect a lot of people don't understand 1) the emphasis in the entire concept on the robots means non-robots are basically a distraction, and 2) people can sympathize with very unusual creatures without a human character.

That's kinda my point. In some cases, we really don't need to focus on the human character. Its not bad to have one, but we don't need ten minutes of story on Spike and Carly and only 5 minutes of Story on Optimus and the Autobots