Sincerity as a Marketable Product

"The secret of acting is sincerity. If you can fake that, you've got it made." - George Burns

Pop quiz! What is the one thing you probably know about Jewel?

Bzzt! Time's up. The answer is "while she was a struggling musician from Alaska she lived in her van." 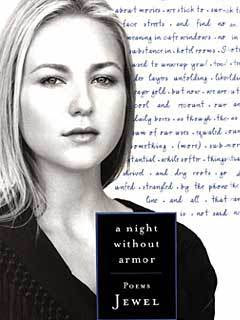 Interesting, but living in your car is practically universal among musicians: Kurt Cobain, the founding members of Aerosmith, Kelly Clarkson and Eartha Kitt all did the same thing. In fact, musicians having it rough is the subject of a whole genre of jokes.

Q: What do you call a drummer with no girlfriend?
A: Homeless.

Yet with Jewel all you hear about over and over is how she lived in a van, which is really not that special or distinguishing as far as musicians go. By Jove! It's almost as if…call me crazy here…Jewel's van days are used as a part of her image, to make her sound sincere and arty.

Jewel, who proved with her poetry she's about as deep and arty as a pizza box, is one of the more offensive examples of a very offensive trend that suckers otherwise smart people: the persona packaged, sold and marketed of an authentic artist who isn't packaged, sold or marketed. I don't know what offends me more: this kind of hypocritical doublethink or the fact people fall for this kind of obvious fraud. 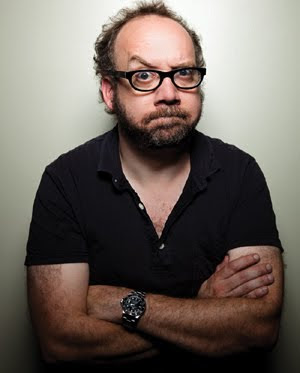 Paul Giamatti is the ultimate example of what I mean. If you like Paul Giamatti because he is a regular guy and everyman actor as opposed to some blow-dried, image-centered and manufactured Hollywood phony…well, I hate to say it, hipsters, but you've been had! I mean it, you've been tricked!

Sincerity? "Regular guy?" Give me a break! Blue blood Paul Giamatti is as much a "regular guy" as George W. Bush, a scion of privilege, with a Dad that was a former commissioner of Major League Baseball.

What I find so offensive and hateful about Paul Giamatti is, not that his success was made possible by wealth and family connections. After all, success in life is about who you know, and I am fine with that and most grownup adults are fine with that. Only lobotomized permanent children like libertarians believe the world is a meritocracy all the time. As a counterpoint to Giamatti, take Sigourney Weaver, who in addition to her incredible talent and obvious professionalism, came from a wealthy showbiz family with her Dad as a former president of NBC who created the Tonight Show.

But Sigourney has never lied to the public and tried to be anything else; she has never created a fake Giamatti image and she revels in her obvious sophistication. She's proud of being Ivy League, with shout outs to Stanford in everything she does. And good for her, I say. 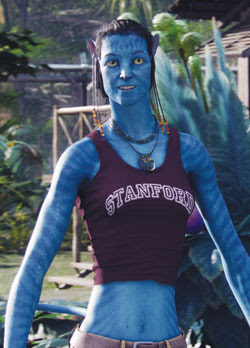 Rather, what I hate about Giamatti is his fandom is based on bamboozling the public into thinking blue-blood Giamatti is a regular working "real" schlub audiences can identify with who achieved in spite of Hollywood's shallow image and marketing machine, when he is in fact a pure creation of that image and marketing machine. He's the George W. Bush of movies. And like Bush, his cult of personality is centered around the worst attributes and vices of the public.

Envy and Spite at Work

There's the factor of envy and spite. Paul Giamatti is not handsome in the traditional, classical sense (although I've found no shortage of women that wouldn't want to get with him), so men aren't threatened by him. Remember how all the women of America hated Baywatch all through the 1990s? 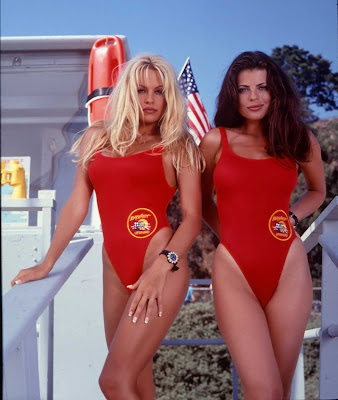 This brings to mind another, crucial question. Who is manufactured? Who is sincere?

When I was a lot less self-aware and honest with myself than I am today, I found myself asking a more mature friend why I hated Leonardo di Caprio so much.

"You know exactly why. You just want a rational explanation."

To show the reasons people have for liking Paul Giamatti are totally illegitimate, based on a phony image, and utterly hypocritical, try this exercise. Why do you hate Justin Bieber so much?

Now, I'm not a fan of the Bieb since I'm hardly the target audience of his music and stage shows, but consider this. Bieber came from absolutely nothing, an unconnected non-showbiz family in Canada. He achieved fame as just another kid making videos on the internet, and he didn't get attention through slick advertising or marketing but by a sincere and spontaneous outpouring of viral support and attention.

If you can think of a beginning that's more Indie, I'd love to hear it, yet the hardworking Bieber is a "phony" because he arouses spite and envy the way the blowdried Leo di Caprio did before him, whereas rich kid Paul "Can I be an actor now, Daddy?" Giamatti, who really is a manufactured product and insincere phony, gets to be down to earth and authentic. The hypocrisy and spite of it all makes me absolutely sick.

You might say it's a matter of talent, but I don't think so. Caprio was obviously a gifted young actor even back in the day even if he did go "full retard" in Gilbert Grape, and look what happened.

Dane Cook is terminally unfunny and horrible, but you know, there are bushelfulls on bushelfulls of annoying stand-up comics – in fact, "obnoxious stand up comic" is practically a redundancy. Why is he singled out for hate? At the risk of pointing out the obvious, the reason is because he's good looking and confident in his delivery. Stand up comics, even the women (especially the women!), have to be slouchy, slobbish and have a sense of humor that is self-deprecating. The power of envy and spite goes beyond showbusiness into the realm of politics. Ask yourself this: when was the last time someone with military experience or decoration beat a draft dodger or civilian in a presidential election? I'm just saying: decorated World War II heroes like George Bush Sr. and Bob Dole lost against dodger Clinton, and medal-wearing, heroic Vietnam vets like Al Gore, John Kerry and John McCain lost out to Ivy League AWOL civvies. The truth is, the majority of the American population have never been in the military and because of their own cowardice, resent vets for their service. I figured it was unwise of Kerry and McCain to trumpet their own record because it would only make the cowardly masses hate them more, and I was proven right in a way that can't really be argued with.

The Hipster Contrarian's Quest for "Authenticity"

The other factor at work, other than spite, is the hipster fascination with "authenticity." Here's a good working definition of indie music that just might apply to indie film, too. Indie music is whatever the mainstream doesn't like. Seriously, that's it. Remember former hipster fave Death Cab for Cutie, and how everyone talked about how they "sold out" when they were picked up by a big label, their sound was never the same? This is an especially ludicrous claim because every Death Cab for Cutie album sounds identical!

As Dr. David Thorpe put it:

"Upon the release of 2005's Plans, DCFC were immediately disavowed as sellouts by the same kids who'd called them rock's saviours the previous year. This of course is not unusual for indie culture, but often there is at least some legitimate complaint, as slick new producers and hot-shit session musicians are brought in to fag up a band's sound just enough so some 17-yr-old mall troll will buy the cd for his sister's birthday. But with Death Cab, indie culture's back-turning rings exactly like the pompous, exclusivist whining it is--because every Death Cab record is exactly the same."

In short, Death Cab didn't change one iota but their authenticity-obsessed and insecure hipster fans abandoned 'em because they became commercial and popular.

I'm reminded of this attitude a lot because Super 8, a Spielberg-inspired romp is raking in oodles of dough at the box office this summer, so it's now time for insufferable film pedants and contrarians everywhere to beat the deadest of all dead horses, how Spielberg and Lucas and William Friedkin and others are responsible for an "infantilization of cinema," as ghoulish bonershrinking harpy Pauline Kael put it years ago back when anyone listened to her.

In the contrarian mind of the film pedant, Lucas and Spielberg are guilty of the greatest crime imaginable: namely, they are successful.

Seriously, at the end of the day, that's what it is: resentment they made movies mass audiences love.

It's hard to imagine now, but there was a time when even oddball director David Lynch made blockbusters. David Lynch's Elephant Man was a bona-fide hit, and George Lucas even approached Lynch to direct Return of the Jedi. Lynch's Dune bombed so badly that era of his career came to an end. Lynch never did blockbusters, but instead chose to do gonzo, surreal pictures like Blue Velvet later on. Many of those films were truly great, and more power to him.

Lynch and Spielberg both made the kinds of movies they wanted to do. The only difference is that Spielberg's movies made hundreds of millions of dollars. Why should Spielberg's success be held against him, especially since he never "sold out" or tried to be desperately popular? This is undeniably true since Spielberg's always done the same kind of thing he's always done.

What can we learn from all this? 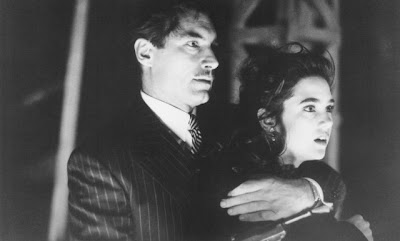 The quest or "authenticity" and hatred of image and "Hollywood" is a phantom, ephemeral chimera that goes nowhere, an intellectual dead-end that leads to nothing except pointless contrarianism. It also makes a person vulnerable to being tricked by frauds like Neville Paul Sinclair Giamatti. After all, the more you think you can't be manipulated by marketing, the more likely you are to be unaware of how it works and therefore vulnerable to manipulation by marketing.


One day, Paul Giamatti will steal that darned rocket pack, though!
Posted by Julian Perez at 1:53 AM

Maybe one day you'll learn what Libertarians actually believe. They don't believe the world is a meritocracy, for one. Never have. Although maybe they believe it should be. That would be a good thing.