Percy Jackson and the Olympians 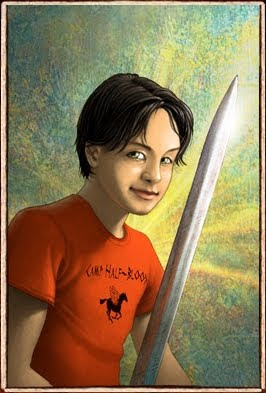 As a student of education and a former teacher, I frequently read children's books to understand them and their content.

...at least that's what I tell people that see me reading something like Phillip Pullman's I Was A Rat! at Starbucks. The truth is, I read them because I actually like young adult series.

I've always struggled to articulate exactly why I liked the young adult series Percy Jackson and the Olympians better than Harry Potter, and I didn't understand why until I saw the movie, and it left out everything that made PJ&O unique.

I really, really, really hate to be that guy that complains about how the book was better...since I love movies and I look forward to movie adaptations, so I tend to give them the benefit of the doubt. But I think it's appropriate in this case.

The truth is, it's painfully obvious Percy Jackson is based on the blueprint of Harry Potter. The difference is that the author of Percy Jackson, Rick Riordan, a western and mystery novelist, was already really experienced and came to write a Potter-esque series very much as his own man, with his own perspective.

(A caveat here: I read only the first two Harry Potter books on a flight to Athens. Amazingly, I have trouble remembering concrete things about them!)


The major difference between Percy Jackson and the Olympians and Harry Potter is in the villains. My biggest problem with Harry Potter is that your initial impression of every character turns out to ultimately be the correct one. Someone introduced as an evil asshole remains an evil asshole.
One of the most complicated and interesting characters in Percy Jackson and the Olympians is Clarisse - a major character that was cut out of the movie entirely - and not just in that her scenes were cut, but that her role was given to other characters. We're introduced to Clarisse as Percy's rival at camp. She wears flannel, loves to armwrestle boys, and listens to speed metal at a loud volume. She's a bully and a brute with a sadistic streak.
Later on, we learn that Clarisse is the daughter of Ares, god of war - and he was physically abusive, insanely exacting as to what kind of toughness and strength he expected from his children, and withheld love unless his children were successful. Suddenly, Clarisse went from being a bully you hated to being a person. You understood why she was the way she was, and she became complex and sympathetic. Clarisse was by far my favorite character in the series for that reason.
Likewise, Hades, god of the underworld, was presented as a very interesting character. He was creepy and weird, but was not evil: he was a very overworked person who was very good at a job that he hates. The story leads you to believe that Hades is responsible for the theft of Zeus's master bolt so as to cause war between Zeus and Poseidon. In the book, it is something of a surprise to see Hades wasn't responsible. The film version portrays Hades as a straight-up villain - which not only eliminates one of the strongest unexpected reversals of the story, but also paints a complex character a deep shade of black. 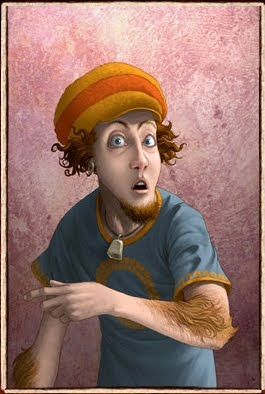 That leads me to the greatest problem with the movie version: the plot went on these weird, un-needed divergences.
When the film versions of intricately plotted books like James Clavell's Tai-Pan or Herbert's Dune cut out side plots or side characters, you're inclined to give the film version some slack because of how complicated and hard to film the book is. Likewise, with superhero movies, it's understandable if changes are made to the original comic book story because of how hard it is to streamline a character's history into something with an information density as low as a movie.
This is the exact opposite situation of The Lightning Thief, a book that has an extremely clear, linear, easy to follow, impossible to screw up "A then B then C then D" plot. Translating this plot to screen ought to have been a cinch.
Amazingly, they screwed up the absolutely easiest thing about bringing a book like The Lightning Thief to screen: the progression of events in the story, how one event leads to another - the plot, in other words. I still can't believe it!
In the book, Percy Jackson is believed to have stolen Zeus's lightning bolt (a weapon with the power of hundreds of hydrogen bombs) on behalf of his father, who turns out to be Poseidon, who is Zeus's brother and rival. To clear his name and prevent universal armageddon that would destroy Western Civilization, Percy Jackson has to head to the underworld (hidden, amusingly enough, under Los Angeles) in order to get the bolt back from Hades. Because Zeus hates Percy and believes he's the thief, flying is an extremely unwise course of action, so Percy and his sidekicks have to hoof it across country in road-trip fashion, where they run into dangers and monsters all over America.
What is so unclear about this story, that there needs to be this weird detour with magical power pearls and the goddess Persephone?
The second characteristic that I believe separates Percy Jackson and the Olympians from Harry Potter is the irreverent sense of humor, this weird juxtaposition between Ancient Greek and modern things. There was really only one scene in the movie that actually captured the humor of the books: Percy Jackson has to kill Medusa by looking at her reflection on the back of an iPod. In the books, Harpies are described as "bird women with faces like evil cafeteria ladies." The summer camp director was a punished Dionysos, who was portrayed as a Hawaiian shirt wearing sleazeball. The humor wasn't there in the movie...it was all played so straight.
A lot of the humor in the book series came from "Star Trek Three" jokes. By that I mean, in Star Trek, to remind you that you were in the future, they list two ordinary things and a third weird one. For instance, "Great scientists like Newton, Einstein, and Surak." Or "Evil tyrants like Napoleon, Hitler, and Khan Singh." The central idea behind the world of Percy Jackson and the Olympians is that, as Western Civilization never died, the gods of Greece present at its birth never did either, and so they follow the West wherever it goes. As, like it or not, America is the center of the Western World right now, the gods live in the United States - Mt. Olympus is the 500th Floor of the Empire State Building. Because of this unbroken chain of mythic heroes to the present, a lot of humor comes from "Star Trek Three" jokes. As in, "there have been lots of female heroes, like Atalanta, Medea, and Harriet Tubman."
Something wildly imaginative as Camp Half-Blood felt cheap and small. In the books it was wondrous and weird, a summer camp with orange t-shirts that you practiced riding winged horses and climbed a wall that periodically sprayed lava down at you, where if you were caught late at night, the harpies would devour you alive. Here, it felt small and very Greco-Roman: people wear cheeseball leather armor right out of a Sam Raimi series. I can understand why they didn't devote any screen-time to background characters like Silena Beauregard, Ethan Nakamura, the Stoll Brothers or Charlie Beckendorf...but not even to put them in the background was typical of a bigger problem, how small and unambitious the world of the adaptation felt. The movie feels cheap and low-budget.
What I find surprising is that the story was made self-contained, like they knew they weren't going to make much money and get a sequel. This results in the removal of very important plot details: the search for the vanished god Pan, and shockingly of all...the central villain of the entire series (the Titan God Kronos, Lord of Time) wasn't even mentioned in the movie. In fact, they deliberately rewrote the story to exclude him entirely. I couldn't even believe it, that's like doing a Harry Potter movie without mentioning Voldemort. 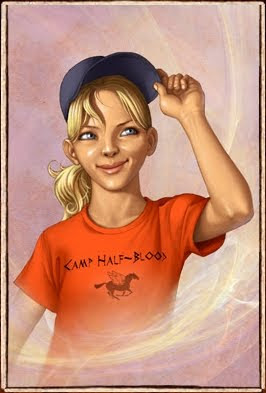 One of the most astonishing things that was eliminated was the prophecy: by age 16, one of the children of the Big Three gods (Zeus, Poseidon and Hades) would make a choice to end or continue the reign of the gods, and for this reason, all three refused to have any more mortal children. This is a shocking omission because it explains why Percy Jackson was the obvious suspect as the Lightning Thief. As it is, the finished film never explains why Percy was even suspected at all, and it unintentionally makes Zeus look Ivan-the-Terrible style paranoid.
When I was in sixth grade, I wrote a book report on Julie of the Wolves. The amazing part is, I had only read half of the book. So, while writing the book report, I decided to make up the entire back half of the plot. The amazing thing was, I actually got an A! Now that I've experienced education from the other side, I understand why: reading 120 identical book reports is a recipe for a nervous breakdown, so if it looks right and is from a known smart kid, there's no need to scrutinize it that heavily if the first few pages look right. (I take my job seriously, so I don't do this. But I can see why others would.)
The movie version of Percy Jackson, ultimately, feels a lot like my sixth grade book report. It feels like they read half of the book and made up the entire second half. For this reason, things that only have a payoff in the end are omitted entirely or used in bizarre ways, like the flying shoes.
I suppose I should end by saying what they did right. The first was the character of Percy Jackson himself. The actor was spot-on as Percy Jackson, a sarcastic chronic underachiever, underdog and outsider. Percy Jackson himself is yet another reason I like this book better than Harry Potter: he felt a lot like real kids, a dyslexic ADHD sufferer labeled a troublemaker, who is easily given up on by teachers that just don't care. The second thing I liked was the casting choice of Sean Bean as Zeus. He was awesome as ever - he plays and approaches scenes in a way that means asking, "how can I do this differently?" For instance, in the scene where he threatens Poseidon with war in the beginning, he plays Zeus as vulnerable and afraid instead of with braggadocio and godly overconfidence.
Posted by Julian Perez at 4:26 PM

Labels: Percy Jackson and the Olympians

In defense if Harry Potter, snape was always portrayed as being an asshole and is even apparently confirmed to be one by the end of Book 6. HOWEVER, in book 7 you learn that he did have a good side and that the act you thought would be unforgiveable turned to be one of the heroic

I'll take your word for it, Eddie.

I will admit, I have always been confused by House Slytherin. When I first read the books, I thought to myself, "okay, they just look like jerks, but it'll turn out they'll be practical, ruthless, and results-oriented, 'good' guys that are a little like James Bond, dirty, but on the side of the angels."

I've said this to you before, but I really want to know: if you have a sorting hat that determines a person's character, and everyone in House Slytherin is an evil asshole...why even have a House Slytherin at all? If someone turns out to be that kind of guy, say something like, "hey, kid, guess what? Your last tuition check bounced so get off our property."