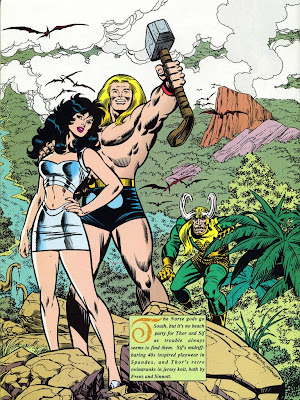 I always liked the Marvel Swimsuit Spectaculars, though not for the reasons you think!
They were fun because they showed the Marvel Universe at play, in a "chilled out" moment. I always really liked "Day of the Life" stories that didn't necessarily feature supervillains but showed what the characters are like "after hours." It always made their lives seem real.
Plus there was some great art, by guys like Joe Sinnott. This particular image gets me misty-eyed because it shows what Thor would have looked like if it'd been inked by a polished pro like him and not the sloppy Vince Colletta. I've always suspected that part of the reason that the Thor Silver Age stories, despite their importance, have never been seen as "required reading" is because of how godawful the art looked under Vinnie.
DC never did anything similar to my knowledge, but I always liked that Paul Levitz and others, very skilled plotters, realized that you can't have Mordru or some other worldbeating menace show up all the time - it's frankly, exhausting, so after some major story arcs, they did stories that dealt with nontraditional challenges and character moments, where often a single punch isn't thrown or a proton beam isn't fired. The best example would be the issues after Great Darkness, which dealt with Mon-El and the horrible scars done to the planet Daxam, which was in essence laid waste by Darkseid. Another good example would be the wedding of Donna Troy.
One of the problems I have with the Grant Morrison run on JLA in the 1990s was that the pace of it was exhausting. Every single arc, everything in the universe as you know it is threatened. The source of the superthreat differed, but it was pretty much the same kind of story over and over - and even usually had the same kind of resolution, with either Batman or Superman saving the day at the 11th Hour. 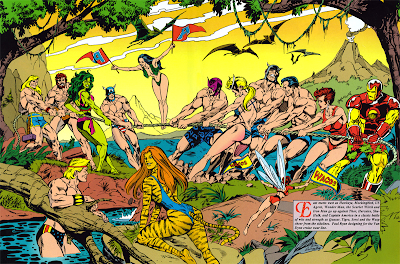 Kurt Busiek's Astro City is one of those comics where, you read and it makes you think very differently about comics afterward. I think what Busiek was trying to do with that book is to show that what is so interesting about superhero comics isn't the battle and the asskicking or even the epic conflicts against villains, but the personal stories. So he wrote a comic that has almost an inverse relationship to the focus: battles are often covered in a single panel, whereas stories that are usually ignored in other books become the central theme.
Posted by Julian Perez at 9:16 PM

Why is Cap wearing his mask here? Is there anyone who doesn't know he's Steve Rogers? And who's the babe in the green vest? (The caption mentions a "Sersi" so I'm guessing that's her, and that the vest implies a Namor connection). Ironic that Tony -- the biggest partier in the Marvelverse -- is stuck in that tin can to preserve the ID.

I can verify that Vinnie's inks (and the goofy King James dialog) have kept me from diving into vintage Thor to this day, despite my tremendous affection for Walt Simonson's run, which rates among my favorite comics work ever. But I get the impression most of fandom considers it "required reading" anyway, and some folks out there even think Colletta added something to the strip.

Moreeltjust "some folks", David. There are no words to express the awe that comic fans expressed after reading those Kirby and Colletta Tales of Asgards and Thors. When I look at them next to Simonson's Thor (no disrespect) I ask myself "what the heck are these people looking at?" Kirby/Colletta Thor was detailed and unlike anything else in comics. Simonson, although good, drew with the same fat ink lines as every other inker uses.

Notice I used the word "illustrated" which is far different then "graphic."

An advertisement is graphic, art is illustrative. The people who usually bash Colletta only understand the former. Too bad.

Why is Sersi even bothering to wear a top in that image?

Probably the real reason they asked Cap to keep his mask on is...well, let me put it this way: there was a scene drawn by Big John Buscema that had Cap, Hank Pym and Hawkeye all talking with their masks off, and it was very hard to follow who was who!

Yeah, that's Sersi for sure, from the Kirby Eternals. Her power was matter transmutation, with such precise control that she do things like turn frogs into robots. I hate to say this because I like her as a character, but I think she was one of the few that was an outright bad choice for the Avengers.

Someone like Thor is a superpowerful character, but in a visual way that benefits stories. With Sersi, you often wondered why battles weren't over five seconds after they started.

When did "unique" become a synonym for sloppy and terrible?

I remember hearing once a story that defined Colletta and his lazy hackery for me: it was a war comic, and the penciler did painstaking research to make sure a specific model of tank was historically correct down to the smaller details. When the inking came back...Colletta smothered the whole thing in black silhouette!

I have seen DC do comics in a "Day in the Life" kinda way. However, I do have to say that the two biggest examples I can think of have come in recent times.

Example 1 is Justice League of America #13 by Brad Meltzer. This issue was the last of his run and it mainly consisted of the JLA taking turns on monitor duty. It was great character with scenes like Black Canary playing the harmonica, Red Tornado ditching dinner with the mother-in-law to go on monitor duty, and Lian wearing a pint-sized version of her dad's old Speedy outfit.

Next is Justice Society of America #26, the last issue of Geoff John's run. This one was the JSA celebrating Stargirl's bday. An earlier issue was mostly a "DitL" in that started out with the JSA hosting a pancake breakfast for some firefighters.

There was also a Superman comic from over a decade ago that dealt with the aftermath of Reign of the Supermen and mostly has Superman flying around helping others soon after he returned from the dead. Most excitings to happen were Superman fighting a loser supervillian during a bank robbery and Supes saving some kids still trapped under rubble left over from the fight with Doomsday

I'll make this brief, since I can't have an extended conversation about a lot of the comic-book content involved here, but anyway, I find it interesting that you are so happy about these slice-of-life character background stories that don't necessarily advance the overall plot when you're reading comics, but the slice-of-life style episodes that fill out characters' backgrounds in LOST apparently piss you off so much.

Anyway, the reason I came: alcohol poisoning in the Prohibition. http://www.slate.com/id/2245188

When I think of great DC "day in the life" comics, I think of the issues of Teen Titans with Wolfman and Perez: everyone had their own thing, their own story, like with "Wedding of Donna Troy" that had no supervillains, or the issue that explored what they did on a day off, where we learned a lot about the characters - including the home life of Kid Flash.

There are different reasons people watch Lost and read comics. I didn't notice that some of the episodes just had a whole lot of nothing until I stopped watching it on DVD. If you have a pace where you watch 3 or 4 episodes on a lazy Saturday afternoon, if an episode is especially uneventful, that's forgivable. But if that's all you've got for the week...you notice!

There are a few great Day in the Life episodes where we learn about the characters - the single episode that got my attention fully about the series was the flashback episode to John Locke. But that showed us something about a person we didn't really know a lot about then: the idea that a he-man hunter-shaman like him worked for a box factory was pretty darn surprising as was the Big Shocking Ending.

(My single favorite episode of the series thus far was the flashback with Shannon and Boone in the first season. It was a gamechanger that recontextualized everything you knew about them.)

I suppose you mean my comments on the recent Kate and Claire centered episode. The reason that one disappointed me was that episode didn't show us anything we didn't already know about them, with the possible exception that the American family that wanted to adopt Claire's baby fell to pieces. At least Locke's "if the plane never crashed..." episode showed us a different trajectory for him, as a skeptical cynic much more like Dr. Jack than the shamanic man of faith he was.

Thanks for the link though, that's crazy.

Considering comics history includes the likes of Wrightson, Kubert, Ditko, Golden and many, many others whose styles are instantly recognizable, singularly quirky and never successfully duplicated by others, I'll have to disagree with you there. Kirby's THOR looked more or less like Kirby's everything else, only watered down and stripped of weight and power by Vinnie's thin lines, bland faces and near-total absence of spotting.

My plan has lately been to get into Lee/Kirby THOR through the "Essentials" books (seeing as how they're cheap and all), but in black and white it can be nigh-impossible to figure out what's going on in the art, so the new plan is to try the trade paperback versions of the masterworks, when they come around.

Which is to say, I may yet come to enjoy Vinnie's THOR inks, but so far it looks like it's going to take the "crutch" of colors to get me there, at the least.