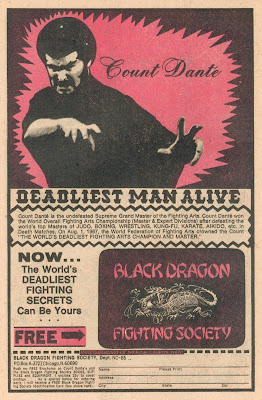 Here's an ad from one of my martial arts comic books. If anything in this world is a responsible course of action, it would be teaching kids that like superheroes THE WORLD'S MOST DEADLY FIGHTING ART.
But let the ad speak for itself:
Yes, this is the DEADLIEST and most TERRIFYING fighting art known to man—and WITHOUT EQUAL. Its MAIMING, MUTILATING, DISFIGURING, PARALYZING and CRIPPLING techniques are known by only a few people in the world. An expert at DIM MAK could easily kill many Judo, Karate, Kung Fu, Aikido, and Gung Fu experts at one time with only finger-tip pressure using his murderous POISON HAND WEAPONS. Instructing you step by step thru each move in this manual is none other than COUNT DANTE—“THE DEADLIEST MAN WHO EVER LIVED.” (THE CROWN PRINCE OF DEATH.)
Not to mention that "The Black Dragon Fighting Society brings you the forbidden secrets of Dim Mak "The Death Touch" in this exclusive book!"
Count Juan Rafael Danté promoted himself heavily in ads in the back of comics as "The Deadliest Man Alive." Nothing like giving yourself a nickname. Best of all? If you send away for the course, you get a free membership card in the Black Dragon Society!
As a final bit of trivia, supposedly the asshole sensei villain in the first Karate Kid movie was based on Count Danté.
Posted by Julian Perez at 10:34 AM

Here is a short on the making of my film about the real man behind the advertisement.

The copywriter on that ad just had to be Dwight Schrute.

I knew plenty of Dwights growing up, and they loved stuff like this. There also seemed to be a cottage industry back then for "Soldier of Fortune" - type magazines promoting all sorts of revenge fantasies and "Black Ops" daydreams to maladjusted teens. I still remember their "ingenious" method for getting around sending weapons to customers through the mail; brass knuckles were sold as "paperweights." Wink-wink, nudge-nudge.

Also I remember from this period (early 70s) the wrestling magazines that featured photos of wrestlers clawing and hammering at each other, covered with blood, and wondering why it never seemed to get that gory on TV. I'm sure the photos were created to keep wrestling fans watching every week in hopes that maybe THIS time they'd see some gore.

I need to check out that link to the movie so I can verify my theory that Count Dante was ultimately killed by a Girl Scout.

The Dwight Shrutes of the world didn't really go away. I knew a whole lot of guys that kept nunchaku in their high school lockers. You know...just in case. Also, people that openly brag about their love of bow-hunting.

A big fantasy for this personality type seems to be End of the World scenarios where they can have total freedom. It reminds me of a quote by Freud: "People only think about disasters when they long for them to happen." Zombie apocalypses are a biggie: it's a combo that really resounds with this sort, consequence-free violence that involves chainsaws, and unlimited freedom with survivalism and paranoia.