What I love and hate about the Golden Age of Comics 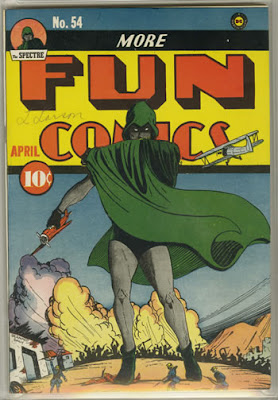 An undead ghoul colossus towers like a god over a nightmare world at war, strutting over a battlefield and gazing on the misery, disease, genocide and corpses.

I'll never get over the contrast between that image and the peppy title, MORE FUN COMICS.

That's why I love the Golden Age: startling, evocative and dark covers that rival the luridness of the weirder pulp magazines.

On the other hand...well, the second image needs some introduction.

I love superheroes. There are only two that I actually hate, one of them is Kitty Pryde and the other is Captain Fucking Marvel. His disgusting adventures are the worst ever written in the entire genre, an embarassment and shame, a permanent black eye in the entire industry. 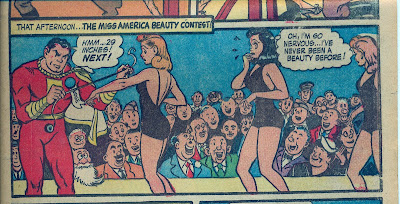 In case anyone wonders if the above scene is taken out of context, take it from someone that has read a few CM books in my time: every moment in Captain Marvel is like this. Every. Single. One.

The experience of reading CM comics can best be described as dying, going to hell, and discovering the devil is Austin Powers and he's trapping you forever in one of his movies.

No reason is given for why CM is even at a Beauty Pageant as a judge.

No reason is given why Captain Marvel has to measure a woman's forearm at a Beauty Pageant.

Finally, in order for a woman to have a forearm 29 inches long, she would have to be over seven feet tall.

If you haven't yet read Gerard Jones' "Men of Tomorrow," check it out. It gives a good account of why the pulpy, gruesome fun of early GA comics gave way to the sanitized boy scouts superheroes became (at least at the company that survived the era, National/DC). Basically the outfit was run by former pornographers eager to remake themselves as solid pillars of the community.

On a related note, I'm enjoying the heck out of my newly acquired Marvel Masterworks reprints of Timely's "All-Winners Comics." Enough mindless violence and wanton destruction to satisfy any red-blooded American boy, and nary a pretense of high art to the whole enterprise.