The coming of the Arockalypse 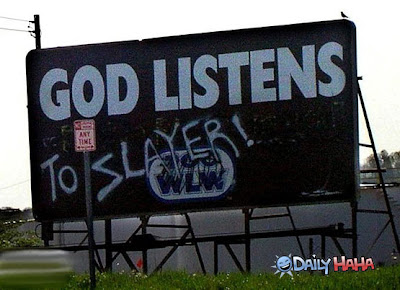 Like lots of angry loners and fire-obsessed American youth, I went through a phase where I was into Heavy Metal. The angry, industrial sound expressed my state of mind, and the dark, supernatural and nightmarish themes delighted me as much as the guitar solos.

Eventually I stopped being a metal fan. Nothing happened, I just grew up.

But imagine my great joy to find the Finnish metal band Lordi, who can best be described as Gwar, except not a joke. They're like a time travel trip back to the eighties; for one thing, they're actually accused of worshipping the devil! (Ahhh, memories.)

Check out their "Hard Rock Hallelujah." It actually features such words as "On the Day of Rockening" and "the Arockalypse." I defy you to watch it and not end up pumping your fist righteously at the chant of "Hard. Rock. Hallelujah."

This is one of the few songs I'd actually like to see live: to experience their righteous pump-notes with an audience has to be something, even if it means the usual perils of experiencing a metal show live: some asshole doing a chicken dance in giant tracked boots and avoiding vomit-covered curbs and leathery, tattoo-covered white trash gorgons that just touching is enough to give a lethal STD.

The sheer, hilarious chutzpah of another one of their songs is worth listening to, if only for the lyric, "The Devil is a loser and he's my bitch."

By the way, the one great thing about Finnish metal bands is, considering that country's history, it's the only kind of metal band that you know won't give you a concept album centered around their love of all things Tsarist Russia.

If you've seen one Lordi video, you've pretty much seen them all, incidentally: they end up terrorizing some place with someone commanding armies of zombies.

By the way, speaking of Finnish metal bands, am I the only one that's noticed how much better the "new" Nightwish is, now that they've gotten rid of Tarja?

Have a look at their first video, Tarja-less:

Boy, more than anything else I've ever said on this blog, I know I'm going to catch hell for saying that Nightwish is better off without Tarja. For many, Tarja IS Nightwish. But I've always hated her: here was this righteous guitar and drum sound, and there was this spectral ghost diva yodeling over all of it.

Incidentally, I've always found it amusing that Nightwish is the only metal band I've encountered where nearly all the fans of it I know are gay men and female. It's like they're attempting to steal the coveted title of "Official Artist of all Broken People Everywhere" from Enya.

It's not that I have a problem with metal that has a melodic component. Quite the contrary, actually...my favorite group always was the melody-heavy Judas Priest. Metal is always better at the two ends of the extreme: melodic groups like Judas Priest, and then percussion heavy groups like Slayer. The groups that try to strike a balance usually suck, much like post-Master of Puppets Metallica.

So, the problem isn't melody. The problem is, as long as Nightwish had Tarja, they always ended up sounding like New Age crap. This is inarguably true; you could play Nightwish's Gethsemane over the loudspeakers at a craft store and I guarantee nobody would notice. It would fit right in!

You might say the Pretty Young Thing they got to replace Tarja (and who looks a lot like her - gives me a real Single White Female vibe!) doesn't have that much vocal range, and you'd be right. But that's missing the whole point. The dirty little secret of rock is that the vocalist isn't that important. In fact, I'm having trouble thinking of really standout hard rock vocalists, except maybe the obvious choice of Freddie Mercury, who was louder than the group itself. They got a robot that won't outsing the band, and that's ultimately for the best.
Posted by Julian Perez at 11:34 PM