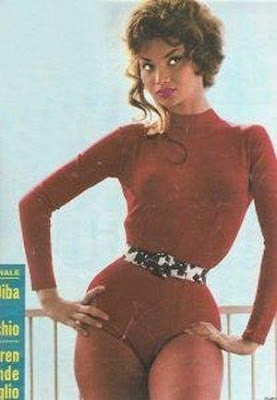 One person I was always fascinated by was Cuban burlesque dancer turned movie star Chelo Alonso. Che Guevara personally tried to convince her to return to Cuba after the Revolution, without success; she acted in films with directors Sergio Leone and Mario Bava, and starred alongside Steve Reeves. 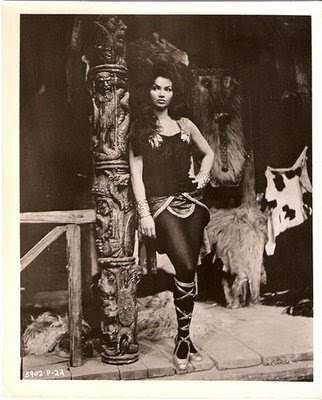 Chelo Alonso, in the fifties and sixties left Cuba for Paris, where she performed at the famous Burlesque club, the Folies-Bergères. She was billed as "the Cuban H-Bomb," Josephine Baker for a new generation, who combined the traditional bump n'grind of the revue with Afro-Cuban rhythms. I've often been intrigued by a lot of the Cuban performers that took residence in Europe. The most famous of course was Jazz pianist Bebo Valdés, who moved to Stockholm and spent several decades performing Cuban Jazz piano concerts there.

Chelo Alonso later went to Italy for film parts and most people know her for THE GOOD, THE BAD, AND THE UGLY, where she was mute and delivered no dialogue. Chelo spent a career playing the exotic evil queen, particularly during the Peplum boom. In fact, Chelo Alonso even acted alongside Steve Reeves himself in GOLIATH AND THE BARBARIANS. One of my personal faves was MACISTE IN THE VALLEY OF THE KINGS, where she played a seductive, evil Cleopatra-like dark villainess. 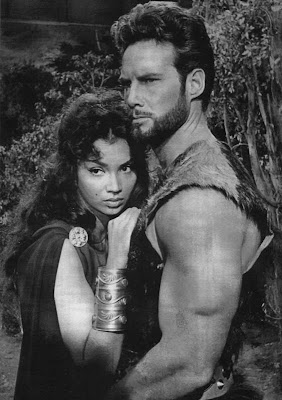 The Marx Brothers movies always had an interlude where where the rowdy comedy family would pause the screwball stunts and Harpo would sit down to play a harp as beautifully as an angel. Likewise, there was always a scene where they'd let Chelo Alonso dance.

Chelo's looks come from her mixed parentage, equal parts Mexican and Cuban. It's interesting to note that in Cuba of the 1950s, Mexican movies were shown and played as often as American ones, and being Mexican was associated with glamour and exoticism. This is in very real contrast to the United States, where people of Mexican background are often exploited for labor. In fact, I remember that my Grandpa and Grandma used to tell people they were Mexican! One of the best existing photographs of my grandmother has her with her hair done-up Princess Leia-style in elaborate braids, in imitation of the Mexican peasant woman style.

Chelo Alonso is a reminder of the glory of Old Havana: a sinful and vice-filled society that no longer exists, done away by the austere and fun-hating Revolution. I've often thought there are fundamentally two types of government, and labels like "right" and "left" are a poor way to make this distinction. It's a great irony that the Christian Right would, if given absolute power, create a society indistinguishable from the atheistic, Marxist Cuban Revolutionaries.

Rather, the distinction should be between dirty, vice-filled societies that believe in live-and-let-live, and the ironically more crooked ones created by nosy, sanctimonious busybodies, hypocrites, puritans and moralists.

Rather, the distinction should be between dirty, vice-filled societies that believe in live-and-let-live, and the ironically more crooked ones created by nosy, sanctimonious busybodies, hypocrites, puritans and moralists.

That would be what they call a false dichotomy fallacy. ;)