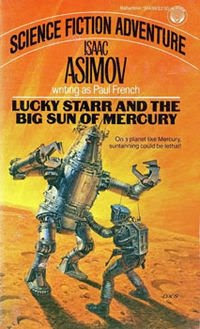 This is kind of embarassing, but the first Asimov stuff I ever read was the fiction he wrote as Paul French - the Lucky Starr stuff, space opera adventure for young adult readers.

Lucky Starr is an agent for the Science Council of the Solarian League, accompanied by his sidekick, the 5'2" ironically named Bigman. Some of the gadgets range from the cool (Lucky Starr's identifying science council tattoo is invisible and changes form beneath his skin), influential (the Force-Blade, the inspiration for all the laser-swords in science fiction), to the just-plain weird (Lucky Starr's hopper, a pogo-car as ludicrous as it sounds).

What's really amazing about the stories is how Lucky Star uses his head: his stories are, contrary to their superficial appearance as Space Opera, science fiction detective stories and mysteries. For that reason, I'll never forgive the cover artist for LUCKY STARR AND THE MOONS OF JUPITER in the seventies series, which blew the ending to the book on the cover! 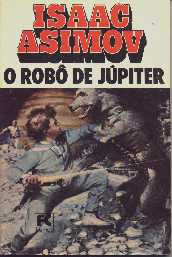 In this series, the crew is plagued by a Robot spy from the Sirius League, settlers that became cold-war rivals to Earth's solar system. The whole mystery of the novel is who the robot spy might be. In the end, it turns out to be the seeing eye-dog of the blind astronaut.
Lucky Starr manages to beat the robot spy the same way everything gets resolved in an Isaac Asimov novel involving robots: by creating a situation where there's a conflict or loophole in the laws of robotics, so the robot shuts down. This is, incidentally, the same technique that would be a trademark of James Tiberius Kirk years later: using logic problems to destroy evil computers.
What strikes me as interesting about the Lucky Starr books is how they are something that Asimov (and for that matter, most good science fiction writers) don't really do: they have a story that can be rewritten without any science fiction elements as another work of genre fiction. Replace the Orion Confederation with the Commies and the Science Council with the CIA and you've got a mystery/espionage thriller.
The best science fiction is the kind that you can't rewrite as another kind of genre story. Science Fiction's best works aren't Westerns with six-shooters and aliens replaced by ray guns and aliens; they aren't fantasy with laser swords and gizmos standing in for magic and swords. Science fiction is a type of story in and of itself. Science Fiction has problems and conflicts that can only exist in science fiction. By no means is this list complete:
1) Communication. How do you express meaning to something totally different from yourself? "Communication" stories include Harry Harrison's WEST OF EDEN, or all those Ursula K. le Guin stories about cooperating with an alien race.
2) A story that provokes a sense of wonder just by its scale. An example would be Bradbury's "You Just Missed Him," about a crew that goes to another planet and discover that someone of great religious significance (presumably Jesus Christ, but this is not explicitly stated) was just there, but they "just missed him." So they rocket to the next planet, only to learn they were too late, he just left there...and so forth.
3) A strong central concept based on real science. The ultimate example would be Niven's Ringworld. The physics textbook has yet to be made that doesn't have at least one work problem and sample test question involving the mind-boggling math of the Ringworld.
4) Sentience. What exactly is sentience and intelligence? Do humans have it? Robots? The best work of this kind would be H. Beam Piper's LITTLE FUZZY.
In fact, all the hoariest science fiction and space opera cliches are stand-ins for tired elements in other kinds of stories. Space Pirates, for instance, or the unstoppable space-Mongol horde that threatens everything (how many quasi-Oriental stand-ins have their been through the history of space opera?), or the cheeseball story type used to lecture us on the evils of prejudice when two alien races fight. As they're aliens, it's perfectly okay for us to be judgmental and shake our heads self-righteously about their tribalism and prejudice. After all, we're so much better than they are, and since they're aliens, we don't have to admit or confront any real flaw in ourselves!
Posted by Julian Perez at 4:21 AM