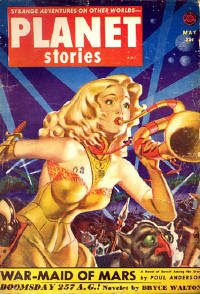 As shocking as it is today, there wasn't much of a place for women in science fiction and fantasy, both as writers, readers, editors, and even characters. When James H. Schmitz published his girl-telepath detective stories about Telzey Amberdon, the reaction was, "this could have been changed to a male character with no trouble."
I doubt that, but that's missing the point: the mentality was, unless there was a compelling reason to have them, a woman protagonist was hard to take seriously. Small surprise then, that most female sf writers have gender-ambiguous names, or use a male pseudonym. 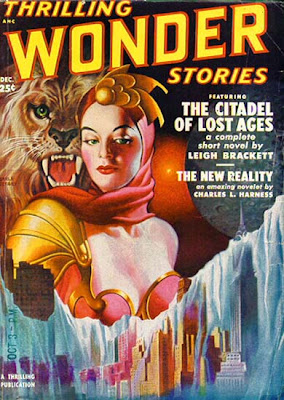 She was the best writer of two-fisted men's science-adventure, but she wasn't a man.

Leigh Brackett wrote not only science adventure stories, but she succeeded in multiple fields of endeavor. In her 40 year career in Hollywood, Brackett wrote the screenplays for, arguably, the best Film Noir of all time (THE BIG SLEEP), the best Western (RIO BRAVO) and the best science fiction film (THE EMPIRE STRIKES BACK), the last of which she wrote in her seventies.

Legendary Hollywood director Howard Hawks was almost bowled out of his chair when he read her hardboiled detective fiction, and when he called "that Leigh Brackett guy" into her office, he almost fell out of his chair. It was by all accounts, Leigh Brackett that came up with the idea that Darth Vader was Luke Skywalker's father, but after Brackett's death in the 1980s, Lucas, that poisonous snake, changed his story.

As a person, Leigh Brackett always dressed like one of those "dress for success" articles, and she drove her red sportscar so fast that she often terrified passengers. Ray Bradbury remembers she once played volleyball with the men on Muscle Beach in California during the early 1940s. 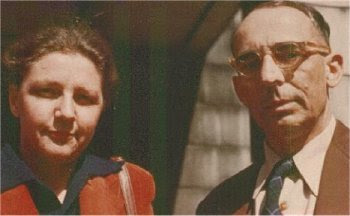 Leigh was married to Edmond Hamilton, "the Planet-Smasher" himself, standby hack of the original space opera generation, and it's argued the only really good stories Hamilton wrote were those that the Planet-Smasher wrote under Brackett's guidance. Leigh Brackett's pupil was some punk teenager named Ray Bradbury.

Brackett's science fiction was best typefied by works like NEMESIS FROM TERRA. She took the Burroughs' style Sword n' Planet yarn and updated it, "improved" it with the sentiment she extracted from Noir and detective fiction and Westerns. It was Brackett, more than any other writer, that created the hardboiled, cynical "Han Solo" space pirate archetype, out for himself. Her villains were not pure "comic book" evil, but a kind of very real, human viciousness and ruthlessness found in gangsters and teamsters. Her heroes were every bit as nasty. 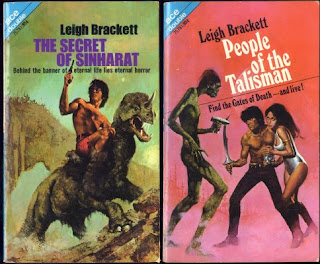 What's even more interesting was how seriously Brackett took the writing of atmosphere, something none of her contemporaries ever did: unlike Burroughs, her Mars was a shadow-filled world much like Robert E. Howard. 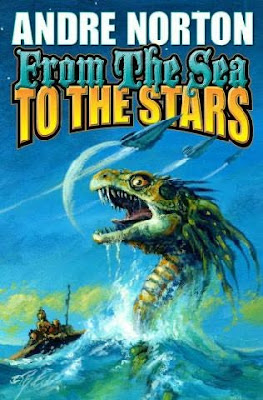 What do you call a science fiction writer that doesn't like technology, that thinks the industrial revolution was "a big mistake?"

The biggest not-so-secret secret in sf is that "Andre Norton" is a pseudonym for Alice Mary Norton. What surprises me most about Andre Norton is that she isn't the object of a cult, the way Heinlein or Robert E. Howard are.

Andre Norton's work show a fascination not with the "hard" sciences, the way Asimov or Heinlein shows, but with the "soft" ones: anthropology, human cultures, archeology. All of Norton's science fiction worlds have a defined prehistory, usually featuring billion year old "Forerunners" that preceded human beings. Her pre-Tolkien boom fantasy series WITCH WORLD had a vague primordial non-human past. She frequently featured non-white protagonists in a positive light; Native American main characters in novels like THE SIOUX SPACEMAN, THE BEAST MASTER, and even applied African culture in a science fiction context in ANDROID AT ARMS.

Andre Norton's stories are about outcasts and misfits finding their place in society, about the seduction of elite power groups, and the desire to start anew on wilderness planets. Her galaxies are usually wilderness worlds inhabited by Star Rangers that are space age versions of Daniel Boone, skilled in woodcraft, inhabited by hostile animals that are tamed by laser gun instead of Western rifles. 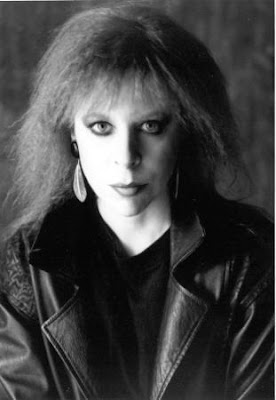 The first work by Tanith Lee I read, had to have been her sf ELECTRIC FOREST - a novel with so many twists it was downright unpredictable. It had at least six false endings, one after the other. This work, more than any other, "hooked" me.

Tanith Lee, unlike the rest, focuses more on fantasy than straight science fiction. Her defining qualities include a fascination with the Arabian Nights, which she used in her brilliant DEATH'S MASTER, a fascination with lesbianism, and frank sexuality. She derives more from Arabesques and the sensuousness and exoticism it implies, than the traditional Tolkien stuff.

I suppose I have to give a shout-out to my hometown girl, Daina Chaviano, don't I? A Miami-native, and the only other Miami science fiction writers I can think of, off the top of my head are the late Hugh B. Cave and...didn't L. Sprague de Camp live out his last few days in Palm Beach, if I remember right? A few friends of mine were THIS close a while back to stalking Encyclopedia Brown creator Arnold J. Sobol, but that's a story for another time.

Unlike Leigh Brackett, who died before I was born, and known J.D. Salinger-esque recluses like Cuban-born, Daina Chaviano wrote several Spanish-language books, that derive from Cuban folklore and myth. A lot of the books that inspire her, I grew up reading. My Dad had a copy of UNA BATALLA CUBANA CONTRA LOS DIABLOS (A Cuban Battle Against the Demons) on his shelf for years, and it spooked the heck out of me. Asimov was fascinated by Communist science fiction, which discouraged exploration into different types of societies out of the sentiment they were creating a new one, like good 19th Century Americans.

Because her work hasn't been translated into English, here in the States, she's mostly read by science fiction fans of Cuban descent in Miami that speak Spanish, which is a niche of a niche.

This is something I've been arguing all along: Spanish language television needs to take advantage of the resource that is the emerging science fiction writing markets. Spanish language TV, if it's at all possible, is even more thickheaded and resistant to change than North American TV: the same damn telenovela over and over. There needs to a be a science fiction anthology series on Spanish speaking TV.

Part of the reason the 1960s produced so many science fiction series of quality (STAR TREKM THE OUTER LIMITS, etc.) was because of the emergence of a real talent base from science fiction that were willing to write for television, that could produce science fiction of quality: Theodore Sturgeon, Harlan Ellison, and so on.

A similar phenomenon could be happening right now in the Spanish speaking world.

Its about time you wrote about Leigh Brackett.

On another note, Tanith Lee looks she belong on an 80s rock group.

Does "James Tiptree, Jr." not deserve a spot here?