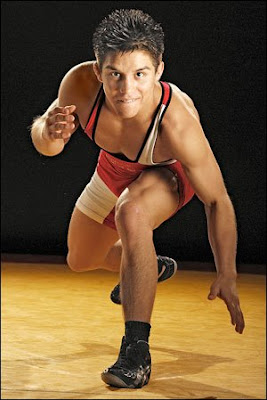 Henry Cejudo became the youngest American to ever win the gold medal in Wrestling, a sport that the United States has won only six gold medals long-term. Americans don't usually pay attention to events like Wrestling or Shotput, but the rest of the world does: Wrestling is practiced almost everywhere in the world, and is the national sport of countries like Mongolia and many Arab countries, so it's definitely high-profile.
The reason this particular victory has significance to me is because Henry Cejudo had a mother that was an illegal immigrant from Mexico. As someone with two parents that are both immigrants, this was a particularly triumphant moment for me personally. I sincerely hope the honor brought to America by Henry Cejudo shames the vicious, toxic bigots into silence.
And hell, it made for some great television, too - Cejudo's a young, photogenic guy and he burst into tears when he won.
Posted by Julian Perez at 12:15 PM

i sincerely doubt any bigots will be silenced by his win. in perfect this triumph would do so but alas, that world is not ours.

On another note, call me this week. i have some things to discuss with you.