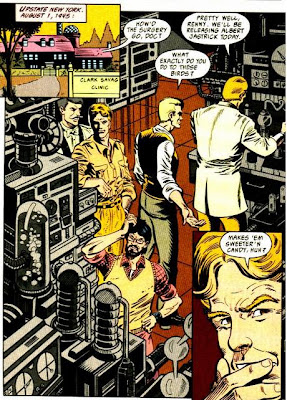 Modern readers unanimously find Doc's Crime College pretty creepy and sinister. It's a place where bad guys either get an operation to remove their memories, or are retrained psychologically to hate crime (exactly what the Crime College did wasn't that clear, and the hints varied on the novel). To modern eyes, the Crime College sounds like brainwashing, or a lobotomy, or both. It doesn't exactly help Doc keeps the place a secret.

Doc's Crime College crops up in other places in pop culture, never taken at face value, usually to talk about how disturbing the implications of it are. The B-Mod devices in "Squadron Supreme" were based on it, as was the memory wipe for criminals on Babylon 5. And the Crime College is immortalized in literature thanks to a mention in Truman Capote's "In Cold Blood." 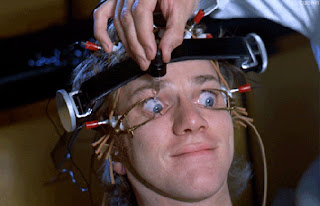 I've always said the Crime College is the single most misunderstood element of the entire Doc Savage canon. It has to be understood in terms of the context it existed. In the 1930s, the Crime College seemed very modern; a humanitarian alternative to prison that emphasized true reform instead of punishment. There was a time when the brain, as an organ, wasn't all that understood and lobotomy seemed like a miracle cure for many disorders. Lobotomy was on the cutting edge (no pun intended), much like how we regard stem cell research today.

The Crime College seems like an extension of the rationalism of the Doc Savage stories, applied to behaviorism and ethics: criminal tendencies aren't due to "evil" or supernatural causes but bad upbringing and problems with the brain as an organ. Modern psychology bears this out: a good portion of violent criminals were abused as children, physically and sexually. This doesn't give them the right to harm innocent people – I'm just saying, it's very possible to create a very reasonable argument violent crime is solvable by psychological treatments. Could anything be more modernist?

What's more, the 1920s and 1930s were defined by the shellshocked attempt to understand the hideous human evil of World War I. The answer, by writers of pulp and horror fiction, was sometimes to say that normal people aren't capable of evil. There were a few stories by August Derleth in the 20s that explained the cause of World War I: an evil subrace of mankind living among us in secret that hated and sought our destruction.

Heck, maybe one of the most famous artists of the early 20th Century, Stanislav Szukalski, claimed that Communism, Facism, WWI and WWII were caused by a subrace of humans that bred with Yeti. He seriously believed this and he was NOT joking. Heck, he devoted a huge chunk of his obvious talent to showing evil people in history kind of look like Yeti if you squint hard enough.

And…c'mon, guys: you really think Doc Savage of all people, Abe Lincoln and Hippocrates in a ripped shirt, would actually lobotomize criminals? It's beyond his moral code. Something like that would make Doc, his world and heroism, look sinister and hypocritical. 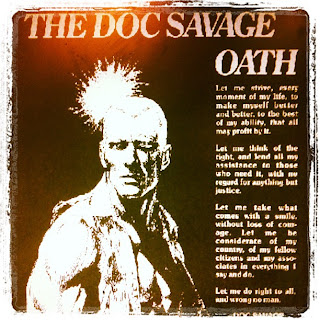 I find the view the Crime College is some behavior modification to be untrue. It has to be understood in the context of its age: the belief in rational, compassionate, scientific reform methods that make prison and punitive methods obsolete, and a naïve attempt to understand human evil. I think we have to accept the Crime College at face value and not project suspicion on it..

Not sure where you're going with this. Granted, nothing nefarious was intended by the writer; obviously he thought whatever went on in the Crime College was a good thing. But as the saying goes, the road to Hell is paved with good intentions, and history's full of men who genuinely believed they were helping mankind, or moving it forward, when in retrospect we recognize their acts as wrong, even evil.

Yes, lobotomy was once viewed as a miracle cure, but now we know better. If Doc did it (and I can't tell from your article whether there's any documentation of that, or it's just assumed) then he was as wrong as anyone else. And if it's true that criminal tendencies are the result of a bad upbringing, then the only sure way to fix it is to start with a clean slate; wipe out those memories and replace them with new ones. And "benevolent" or not, that's still brainwashing. No one disputes that both the surgery and reconditioning occur against the patients' will. It can even be argued that by re-making the criminals into new, productive citizens, Doc is in fact committing murder. The men who go into that place never come out again; they are replaced with new men who look the same and have the same names, but everything that made them who they were (evil or not) is destroyed.

So yeah, I agree nothing sinister was implied (that is, Dent didn't mean to suggest anything ugly was going on off-screen, and that Doc was anything but virtuous), but for a modern reader not to be chilled by the whole concept requires a huge suspension of disbelief.

For a series which, as you say, is dedicated to debunking the supernatural, mystical and extraterrestrial, it is a glaringly out-of-place endorsement of pie-in-the-sky hocus pocus. There's no real goblins or aliens, but trust us, science can do anything. Never mind how, it just can. And it's always for the greater good.

So yeah, I agree nothing sinister was implied (that is, Dent didn't mean to suggest anything ugly was going on off-screen, and that Doc was anything but virtuous), but for a modern reader not to be chilled by the whole concept requires a huge suspension of disbelief.

I agree with you here. It's definitely a problematic concept. There's no way for a modern reader to see this kind of memory-erasing or behavior modification and think, "a-ha, that's just a very modern means of rehabilitation that's better than prison."

I strongly suspect the movie version won't mention it, because it is creepy.

That's sort of the point isn't it? Stuff that seemed perfectly reasonable decades ago to large portions of the populace seems creepy and wrong now.

Sure the writers weren't thinking 'hey this is totalitarian repression and deeply unethical' but that's the point. The unpleasant truth is that Hitler got a lot of his nastiest ideas from North American Eugenic theorists and sterilzation laws in places like Indiana and Georgia. Auschwitz taught us where the end point of such ideas is.

Lots of people in the thirties thought social problems, crime all sorts of anti-social behaviour and social problems could be solved with, essentially complete state control over the idividual extending even to their inner brains. Stalin and Orwell taught us where that leads to.

I don't think the Crime College is misunderstood at all. It's understood BETTER by modern readers than the writer did because of our historical perspective.

That's sort of the point isn't it? Stuff that seemed perfectly reasonable decades ago to large portions of the populace seems creepy and wrong now.

There actually might be a legitimate argument for something like the Doc Savage Crime College in the case of capital crimes.

If someone is subjected to capital punishment, they are no longer able to repay what they took or make a contribution to society as a whole.

Something like the Doc Savage method, of a memory wipe, followed by ethical retraining, might be acceptable if the alternative is death.

What IS a person? Is it death of personality? What would qualify as an execution?

Lots of people in the thirties thought social problems, crime all sorts of anti-social behaviour and social problems could be solved with, essentially complete state control over the individual extending even to their inner brains.

I think the Doc Savage Crime College comes from a much more progressive and rational place: either the belief criminal tendencies are some kind of medical problem or due to organic damage, or due to abuse and psychological issues. It's true that a majority of criminals were abused, and most studies support the idea "nurture" plays a bigger role in criminality than "nature."

The unpleasant truth is that Hitler got a lot of his nastiest ideas from North American Eugenic theorists and sterilzation laws in places like Indiana and Georgia. Auschwitz taught us where the end point of such ideas is.

I wouldn't say that the crime college is misunderstood, per se, but I do agree that it was intended as something humanitarian as opposed to totalitarian. That being said, I find a modern interpretation of Doc Savage to be extremely interesting, and books like "Doc Savage: his apocalyptic life" by Philip Jose Farmer are where I got my first exposure to the character and the pulp genre as a whole. So even if it is viewed as creepy in modern times, I'm glad that Dent included the Crime College aspect of the character.

Even if Doc Savage lobotomized crinibaks, I have no issue with it. They had a choice.