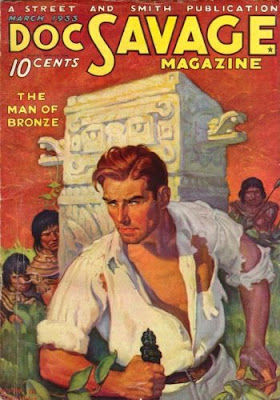 What strikes me about the first Doc Savage novel is this: how fully formed and complete the character is even at the very beginning.

Sure, Doc shows a little more emotion than we would later learn is normal, and he even killed someone, but nearly everything we associate with and define Doc Savage is here: his tremendous, Tarzan-like physicality, the way he does some little thing that seems unimportant at the time but later on turns out to crack the case, the bickering between Monk and Ham, Doc's lack of interest in women or romance. The plot of "Man of Bronze" is the same formula, already in place, as the archetypal Doc Save story: it starts in New York and ends in a journey to some exotic locale, a murder happens by some unknown supernatural means that later turns out to be perfectly explicable and altogether ordinary and rational, the main villain is a masked leader of a criminal gang who's identity is not revealed until the last page. 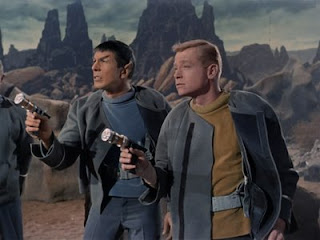 In fact, the first book is so similar to the rest, it's something of a disappointment. I was expecting something very much like the early episodes of Star Trek before the series took shape, where Spock smiles and is called a "Vulcanian," people wear wrong-colored shirts, the ray gun props look laughably out of Buck Rogers, and the ship's doctor is a different person.

Despite being the first Doc Savage story and the one where Doc acquired his tremendous wealth, he's still living in digs on the 86th Floor (how's the rent getting paid?), throws money around, and even destroys a plane merely to test a suspicion. Despite the fact Doc Savage hasn't even had any adventures yet and so shouldn't have a reputation, on his very first day on the job fighting evil, he has enough pull to keep newspapermen from reporting a mysterious death/suicide and could ask the army to lend him a specialty plane (and again, it's not clear why the army would listen to a private citizen). 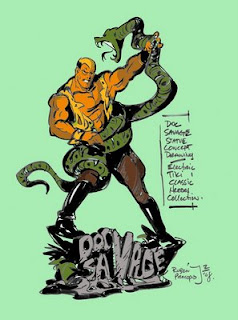 It would actually not surprise me if it turns out the Doc Savage novels were written out of order, because except for the absence of pets like Chemistry and Habeas Corpus this could have been slipped into any point in Doc's history prior to 1944.

In addition to my reviews, I'll include identification of some things every Doc Savage story has. What the story ripped off (used humorously, not maliciously and to point to the genealogy of ideas – after all, nothing is ever 100% original), a weird/hilarious sign this was written in the 1930s, a weird Doc Savage skill he uses which is often never mentioned again (usually something bizarrely specific like his perfect handwriting, machine perfect telegraphy, epic skill with airplane skywriting, or ability to modulate his voice so he comes out clearer over a microphone).

What It Ripped Off: 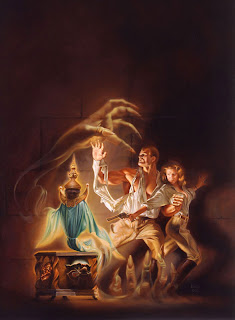 Essentially, the plot of "The Man of Bronze" is similar to King Solomon's Mines. Doc Savage, hearing about his dead relative, goes to look for his lost treasure, which leads him to a lost city of Mayans, all the while curing a horrific red splotch plague. The villain, just like Gagool from King Solomon's Mines, is a horrifying sorcerer, the Winged Serpent, who turns out to be a faker with no power at all the heroes defeat by beating them at a "wizard contest" they win with trickery.

The South American henchmen use machetes, which the novel stops to carefully explain is actually just a local name for a "corn knife."

I find that hilarious, since these days that kind of hacking cleaver is known as a machete (or for you CNN viewers, a panga, the weapon of choice of the Rwanda Tutsi genocide), and the term "corn knife" is totally unknown! 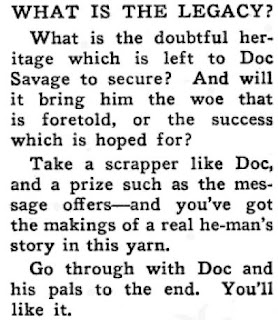 Also, there's this bizarre blurb inside the pages, reprinted in the copyright-violating Black Mask reprints (despite their illegality, the highest quality and reprint the original pulp mag's art).

I guess they slipped that in the first page to encourage people who leaf through these mags on the stand to actually buy it.


Debunk of the Day (Spoilers):

The mysterious red splotch death plague of the story? It turns out to just be virulent parrot fever introduced to an Indian population that had never seen it before. Nothing supernatural about it, but surrounded by irrational fear and folklore – something to remember in this day of wild crazy panic over AIDS and swine flu. 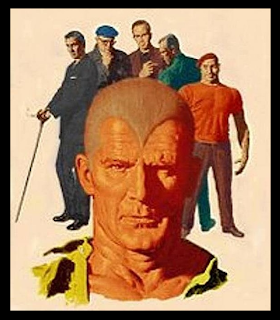 Doc shows surprising sympathy for native people, shocking for his era. You can chalk it down to flaming liberal (by the standards of his day) Lester Dent, from Missouri, who grew up around heroic Indian stories.

"But this land is all yours."

"In the eyes of civilized law, probably so," Doc agreed. "But there's another way of looking at it. It's a lousy trick for a government to take some poor savage's land away from him and give it to a white man to exploit. Our own American Indians got that kind of a deal, you know."


Doc Savage, like the "hip" Marvel heroes, always seemed more on the bleedin'-heart, humanitarian end of the political spectrum. He avoided killing and his stories expressed a sincere, idealistic belief reform is possible for hardened criminals.

There is an unintentionally creepy moment, in light of the modern anthrax scare, where Doc receives a red envelope covered in plague germs. That's the kind of specific murderous detail that makes me doubt the target audience of this were the young 'uns.

Good stuff here. I'm only marginally familiar with Doc Savage. I have a pdf of all the old pulps, but they really lose something presented that way. I think pulp novels need to be read in a magazine or paperback - at least, I think I need to read them that way. I have the same problem with comics (at least of my youth) on a tablet. I need the physicality for that part of my brain to really take it in. Anyway! I HAVE read Philip Jose Farmer's bizarre A Feast Unknown, and the less bizarre DS: His Apocalyptic Life, both of which I enjoyed (though for different reasons.) I imagine you've read or are familiar with both. At the time I read the former, I was 14 or 15, young enough to be quite shocked by the goings-on within. By the time I read the latter, I was older and had a real appetite for retro and pulp, and I enjoyed the comprehensive overview of the character's world.

I have a pdf of all the old pulps, but they really lose something presented that way.

Let me guess, the BlackMask.com pdfs? Great stuff and had the original pulp art, but as it turns out, they weren't entirely legal. Black Mask thought they were because they couldn't find a copyright renewal on the registrar, but it turns out, the registry for periodicals is different and wasn't digitized until the later part of the past decade. So essentially, they exist only due to bad librarianship!

It's easier to rid the world of cockroaches than it is to rid the internet of files you want to take down, so those pdfs are everywhere now.

I think with the rise of the tablet and ereader I can't agree with the idea you need something physical to read comics or books.

Anyway! I HAVE read Philip Jose Farmer's bizarre A Feast Unknown, and the less bizarre DS: His Apocalyptic Life, both of which I enjoyed (though for different reasons.) I imagine you've read or are familiar with both. At the time I read the former, I was 14 or 15, young enough to be quite shocked by the goings-on within.

PJF's Doc at its best ties together ideas I never even noticed, like putting forward the idea Doc suffered a serious injury during the Derelict of Skull Shoals, which is why Doc was never really "right" after 1944. Another explanation from the DC Comics by Denny O'Neil was that Doc vanished in 1944 and was replaced by an actor.

Then again, there were some times I thought PJF was reaching, like the idea John Sunlight was Doc Savage's son. Among other things, the timing is pretty fishy – he'd have to be 20 at the most generous in "Fortress of Solitude," not exactly right for the Devil Genghis himself.

I'm kind of amused by the idea PJF says some stories were just flat out fictional. (As opposed to what?) Like the World's Fair Mystery, which had to have been written before the opening day it was set on, so it "couldn't have really happened." That kind of nerd stuff always makes me smile.

Feast Unknown and its sequels were interesting. I appreciate it for being the first time someone flat out said something everybody knows: at some point Tarzan must have had sex with an ape.

As for the business about getting an erection during violence...I wonder what Frank Miller would have made of that!

I honestly can't recall if it was BlackMask or not, but yeah, probably.

The ereader and tablet are indeed cool and are softening me up, but yeah, a big part of the appeal for me is the physical comic or the paperback. It's not a dealbreaker, just a personal hang-up, more or less. (I love lugging the kindle around vs. a huge hardcover, tho, so don't think I'm too dedicated a Luddite!)