Coming soon to a dive Italian take-out pizza and subs joint near you!

Isn't it enraging that the only good Superman game ever made was never, ever released for home consoles?

Not only that, it's the only Superman game ever made that used the trademark John Williams music from the movies. Just listen to it. There's even a hilariously "action-y" up-tempo version of the dopey love scene music on one stage. 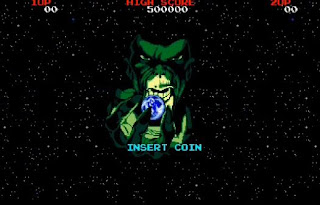 Though it doesn't use any known Superman bad guys, it nonetheless feels like a Superman story: a fiendish green warlord leads a global alien invasion, one that apparently is only interested in attacking America's most scenic locations like the Las Vegas strip and San Francisco's Chinatown.

The aliens include a giant loincloth wearing Harryhausen cyclops, 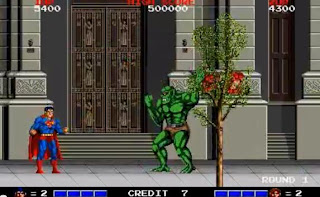 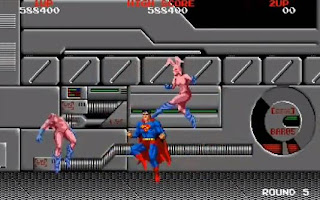 Spider-monsters that trap you in a web; 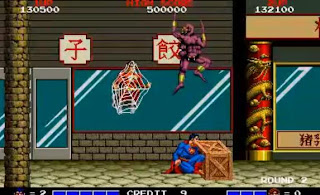 Apparently the one thing the aliens all have in common is, when defeated they break up into the into the Outer Limits horizontal lines that Unicron used to create Galvatron. 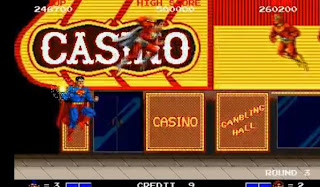 So far, so good: you have a science fiction themed global alien menace, an element of travel. Everything you need for a good Superman game.

This looks like a job…for Superman! And red Superman! 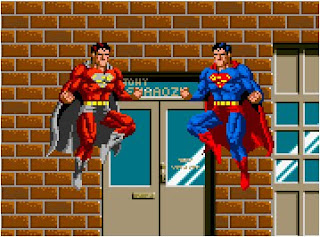 Wait! Who the heck is this guy? Is this possibly a reference to Superman-Red and Superman-Blue, the Imaginary Story from 1967? 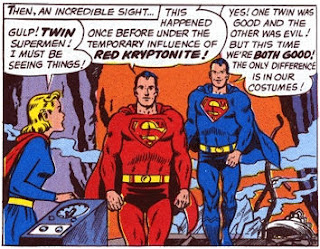 If so, kudos. But I doubt it, since it's traditional for beat 'em up games to have a co-op mode, with a second player created by a palette swap (see also: Double Dragon, Altered Beast). The presence of a Red Superman may just be an especially chutzpah filled example of video game adaptations' greatest motto: "to hell with it, nobody will notice." 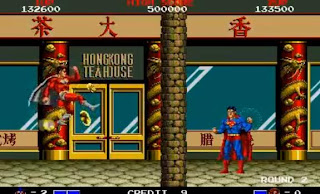 This reminds me of how, when you were a kid, you'd play Superman on the playground and everybody wanted to be Superman. If Superman comics were like our playground games, there would be approximately 500 Supermans flying around out there arguing who hit who.

But it gets more interesting, because have a look:

Unused sprites left in the game show a second playable female character. Possibly Supergirl? There might have been an idea to make Player 2 Supergirl, but palette swaps were easier. And besides, in an era of zero female game characters, some chauvinistic boys might not have liked playing a girl - even Supergirl.

(FYI, or those unaware, it's actually easier to leave in unused or unfinished content in a game rather than eliminate it totally, because if you yank something out it might create problems with programming it's "attached" to. So it's usually easier to just block something out. But those who get their hands on the game code can sift through it line by line like bread crumbs and find all kinds of surprises. There are many interesting examples, like an unused, incomplete level in Sonic 3, or like the fact Legend of Zelda: the Ocarina of Time, a fantasy game, has a futuristic tiny starfighter Arwing from "Starfox" that was added in to test the flight physics.) 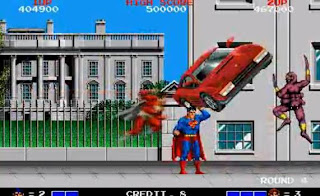 The game doesn't stiff you when it comes to Superman's powers, and doesn't cheaply dole them out in ways like putting them on limited uses, or linking them to power ups. It's possible to lift and throw cars, and the game is even built around the element of flight, with it going vertical instead of the weird 3-D perspective seen in brawler games like Double Dragon, which means your punches end up hitting only air because of an error in depth perception. 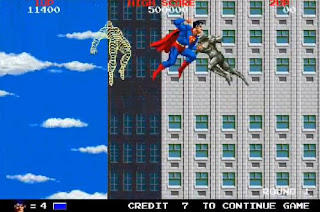 There are levels that become flying stages where you soar upwards, which is a downright revolutionary use of space in a genre defined by The Eternal Quest to Go Right. There are even some Gradius or Lifeforce style 2-D "schmup" stages where you blast enemies with laser vision. 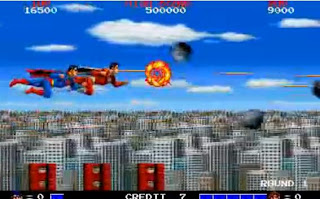 The game is a lot like the movies in ways other than the music, especially in the sense that Superman, instead of having his traditional powers, is basically like a genie, given additional bizarre powers for budget reasons. In the movies he could appear in several places simultaneously, use telekinesis, throw his S-shield as a cellophane trap…not to mention "Great Wall of China Vision" from Superman IV.


In the tradition of the movies, Superman can apparently also either throw his fists (like Voltron?) or his fists can create charged up fireballs in the shape of a fist. Not entirely sure what's going on there.

In general, the game is worth trying if you can find a cabinet, even if it doesn't have any of the Superman enemies, supporting cast, or even Kryptonite, though the last one is annoyingly overused. The fact it is unavailable is a crime, and a sign of how totally possible it is to "lose" video game culture. Like movies in the silent era, they just weren't seen as important enough to preserve or keep in circulation.
Posted by Julian Perez at 5:40 PM